You are here: Home / Europe / Top Imam: conquer Europe by breeding with its people 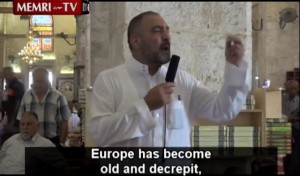 “We have 50 million Muslims in Europe. There are signs that Allah will grant Islam victory in Europe — without swords, without guns, without conquest — will turn it into a Muslim continent within a few decades,” said late Libyan leader Moammar Gadhafi in an April 2006 speech. While his estimate of Muslim numbers in the Old World was likely a bit high (at the time), critics say the “demographic conquest” he outlined is prescribed by the Koran. And now a top Islamic religious leader has echoed his sentiments, saying of Europeans, “We will breed children with them, because we shall conquer their countries!”

A top Iman has told Muslims to use the migrant crisis to breed with European citizens and “conquer their countries.”

Sheikh Muhammad Ayed gave the speech at the Al-Aqsa Mosque in Jerusalem claiming Europe was only welcoming refugees as a new source of labour.

He said Europe was facing a demographic disaster and urged Muslims to have children with westerners so they could “trample them underfoot, Allah willing.”

While Ayed’s speech apparently had the tone of a red-meat talk designed to “rally the troops,” the demographic disaster he spoke of is a reality. As I reported when reviewing the fine documentary Demographic Winter, Europe’s birth rate has long been below replacement level (2.1 children per couple), with areas in Spain and France having rates below 1. Consequently, native European populations have been decreasing for decades. (Note: The occasional articles about a birth boom in, for instance, France, are deceptive. They generally don’t point out that such fecundity is driven not by natives but Muslim transplants.)

And while these transplants have been filling Europe’s “empty seats” for decades, the current migrant crisis is turning a trickle into a tsunami. In fact, if Hungary’s minister for foreign affairs and trade Peter Szijjártó is correct, these human waves could be far more formidable than most suspect. As he recently said, reports the Express:

It’s a self delusion to call this situation a migration crisis; it is a massive migration of nations, with inexhaustible reserves.

I don’t think that the analysis results, stating that 30-35 million people out there could possibly become migrants, would be an exaggeration.

Libya, Yemen, Syria, Iraq and Afghanistan are all countries with a huge population and an extremely unstable situation.

As to this reality and Ayed’s call to arms, while at issue here are births and adult bodies and not bombs, history is in a sense repeating itself. In a demographically compromised eighth-century Europe, with her peoples having been decimated by plagues and other disasters, Muslim armies got within 125 miles of Paris before being stopped by heroic Charles Martel (Charlemagne’s grandfather) at the Battle of Poitier in 732 A.D. Three and a half centuries later, Muslim conquests in the Byzantine Empire that brought Islamic forces close to Europe’s “back door,” the Balkans, sparked the defensive campaigns known as the Crusades. And Dar al-Islam’s hordes would even reach the gates of Vienna — twice — in 1529 and 1683.

Shortly thereafter, the West’s technological revolution rendered such campaigns impractical, but its more recent moral devolution has made stealth jihad a reality. As InfoWars reported on Friday:

“Europe has become old and decrepit and needs human reinforcement…. They are not motivated by compassion for the Levant, its people and its refugees,” said Ayed, adding, “Soon, we will trample them underfoot, Allah willing.”

“Throughout Europe, all the hearts are enthused with hatred toward Muslims. They wish that we were dead, but they have lost their fertility, so they look for fertility in our midst,” he added.

… “We shall soon collect them in the name of the coming Caliphate. We will say to you: these are our sons. Send them, or we will send our armies to you,” concluded Ayed.

Of course, much of Ayed’s rhetoric is propaganda. Compassion may not be the main driving force behind Europe’s immigration policies, and Western elites certainly have a penchant for importing cheap labor. But what really animates Europe’s culturally suicidal tendencies is political correctness and leftist lust for power. As to the latter, note that former Tony Blair aide Andrew Neather actually admitted in 2009 that his British Labour Party’s “mass immigration” policies were intended to create a “multicultural” United Kingdom and thus “rub the Right’s nose in diversity and render their arguments out of date.”

And speaking of compassion raises a question: While the onus here is placed on (marginally) Christian Europe, what of oil-rich and relatively sparsely populated Muslim nations such as Saudi Arabia, Qatar, and the United Arab Emirates? The Muslim “refugees” would seem a better fit in them, yet these countries refuse their co-religionists refuge.

Instead and quite tellingly, Saudi Arabia has offered to build 200 mosques in Germany to accommodate the new migrants. And while German politician Andreas Scheuer called the offer “cynical” and asked, “Where is the solidarity in the Arab world?” even that understates the matter. Consider the reality of the Saudi proposal:

• They’re not willing to devote resources to provide refuge for fellow Muslims.

• They’re not even willing to donate money to help fund Europeans’ provision of same and for programs facilitating assimilation.

• But they are willing to spend countless millions on mosques in Europe, institutions wherein a foreign faith will be reinforced and, as history has shown, jihad will sometimes be preached.

What can we infer from this?

Also note that to an extent this is just a numbers game. If a nation admits 3,000,000 Muslim migrants — as the United States has since 9/11 — probability dictates that some percentage of them will have or will develop terrorist leanings. Of course, the figure may only be one-tenth of one percent.

That would be 3,000 potential terrorists.

To further illuminate the issue, bear in mind that the current migrants in Europe not only haven’t been vetted but have been witnessed attacking police while issuing the jihadist rallying cry “Allahu akbar!” Another was seen making a throat-cutting gesture on Hungarian TV.

But are Europeans really just cutting their own throats? Ayed’s prescribed demographic warfare and cultural genocide are well-known tactics of conquest. And, in fact, when Han Chinese flood into Tibet, leftists don’t shrink from issuing an ominous warning: This, they say, is cultural genocide. But when the same thing happens in the West, encouraged by those very same leftists? Then they call it diversity.