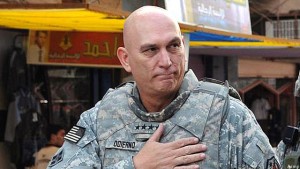 The top Army general said Wednesday that the U.S should consider embedding soldiers in Iraq if the battle against ISIS doesn’t improve.

“If we find in the next several months that we aren’t making progress, we should absolutely consider embedding some soldiers (in Iraq),” Gen. Raymond Odierno, outgoing Army chief of staff, APA reports quoting CNN.

Odierno rejected the idea, however, of the U.S. taking over the fight against ISIS: “I absolutely believe the region has to solve this problem. The U.S. can’t solve this.”