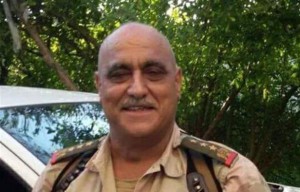 A top Free Syrian Army commander has been killed in the fierce fighting in northwest Syria, where pro-regime forces have pressed an offensive in the mountains outside Latakia.

“We proudly announce news of the martyrdom of military advisor Staff General Rasheed Bakdesh,” the FSA-affiliated Army of Mujahedeen said on Wednesday.

The rebel group—which has reportedly been armed with weapons by the CIA—revealed that Bakdesh had been killed fighting in the flashpoint Jabal al-Akrad region, where Russia has conducted intense airstrikes in recent days.

On Tuesday, Turkey shot down a Russian Su-24 fighter jet on a sortie in the region after Ankara said it strayed into Turkish territory, a claim strenuously denied by Moscow.

In the ensuing hours, Russia picked up the tempo of its airstrikes in the area, where rebel Turkmen groups with close ties to Ankara operate.

The Army of Mujahedeen did not specify how Bakdesh was killed, saying simply that the general “met his God in the end, in the battles of glory and dignity in Latakia countryside.”

“He chose to take the side of the oppressed people and their just revolution in which he provided his long experience in the military field,” the rebel group said.

Bakdesh—a graduate of the regime’s elite Military Academy—had turned against Bashar al-Assad in the early days of the Syrian uprising, when he was serving as a high ranking officer in the pro-regime Popular Army militia in Idlib’s Jisr al-Shughur.

According to a biography of the rebel leader by the pro-opposition Souriat outlet, Syrian regime authorities arrested Bakdesh on charges of cooperating with rebels and supplying them with weapons and ammunition.

A field military court sentenced him to life imprisonment, a verdict that was later reduced to 10 years. However, after serving two years in the infamous Sednaya military prison near Damascus, the regime released Bakdesh as part of a large prison swap deal.

Upon his release, the military officer went to work as an advisor with FSA factions in the Latakia province’s mountainous Jabal al-Akrad region, where Bakdesh was born in 1960 in the village of Mazzeen.