You are here: Home / Analysis / Too soon to celebrate the demise of ISIS 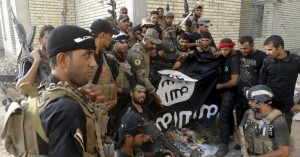 Don’t rejoice over claims that ISIS is on the ropes. The dark, poisonous soil that has given birth to tens of thousands of extremists in Iraq and beyond hasn’t lost its fertility.

Many years ago, back in the 1990s, when Saddam Hussein was still in control of Iraq, an official in the Ministry of Information and Culture would regularly summon me to his office for tea and a tirade. Sometimes it was about our coverage, but often he waxed angrily about the United States and Western policy toward Iraq.
“Someday, a new generation of Iraqis will come with a hatred you won’t be able to imagine,” he told me. “We older Iraqis still have positive memories of the West, but they will have only hate. Remember my words,” he said.
The official, Udai Al-Ta’i, was an intelligent and sophisticated man, fluent in English and French, and had served in the Iraqi diplomatic service in Europe. He often spouted the regime line, but on this occasion his words seemed to come from deep inside.

The ravages of the sanction years

This was at a time when Iraq was laboring under the U.N. sanctions imposed after the 1990 invasion of Kuwait.
Then, Iraq’s media minders were always eager to take us to the country’s crumbling, crowded hospitals, to show us babies suffering and dying from malnutrition and disease.
The United Nations estimated that more than half a million children died as a result of the sanctions. One can debate the causes: the impact for millions of ordinary Iraqis was devastating.
Back then occasionally we would be called to cover macabre regime-organized baby funerals.
A line of battered orange and white taxis wound their way around central Baghdad, little wooden coffins tied to their roofs. Hand-written signs bore the name of the dead baby, blaming the sanctions for their death.
By the road, women wailed and rhythmically slapped their faces, their children by their side, watching in silence. The first time, skeptical of the spectacle, I insisted on opening one of the coffins. Inside, I found the lifeless body of a baby, wrapped in a white sheet. The dead babies were real.
The ravages of the sanction years, and the violence and upheaval that followed the U.S.-led invasion of Iraq did indeed deeply scar a generation of Iraqis, the generation that has now come of age and has provided many willing recruits for ISIS.

The bitter fruits of the Arab Spring

The torture chambers of the Arab world are more crowded and busier than ever. While what we once optimistically called the Arab Spring temporarily shook the region’s totalitarian brutes (many of whom, it should be noted, are “friends” of the West), the lesson they took away from the dramatic demise of “milder” dictators, like Egypt’s Hosni Mubarak, was that even the slimmest margin of dissent cannot be tolerated.
The exhilaration of sudden freedom and liberation is long gone, a distant and fading memory. Hindsight laughs at our naiveté. The fruit of the Arab Spring has been chaos, war, displacement of millions, bloodshed, sectarianism and renewed oppression.
One young revolutionary in Cairo I’ve known for years has withdrawn into hashish and abstract art. “A dead activist is useless,” he told me recently.
Others drew another conclusion. The failure of the Arab Spring and the redoubled repression that followed proved that the political order in the Arab world is beyond repair, and only the most ultra-radical of solutions, the resurrection of a dystopian caliphate that never really existed — the future as envisioned by ISIS — is the solution.
Those who seek proof of the illegitimacy of the state as it exists today in the Arab world needn’t look far for validation.

The disease itself is still there

Yes, an optimist might say that ISIS is on the run and that at least that challenge is being addressed.
In Iraq, the military and paramilitary forces have driven ISIS out of Tikrit, Baiji and Ramadi, and are pummeling the extremists in Falluja.
In Libya, troops from competing governments in the east and west have pushed ISIS back to the outskirts of the city of Sirte. Little over a month ago, the extremists controlled almost 200 kilometers of the Libyan coastline.
In Syria, the forces of Bashar Al-Assad have retaken Palmyra with the help of Russian military might and in the north the U.S.-backed Syrian Democratic Forces are steadily gaining ground. ISIS is reportedly suffering from desertion, internal bloodletting, a shortage of funds and flagging morale.
ISIS, a symptom of the deep-rooted disease of oppression, is in the process of being destroyed. The disease itself, however, is still there.
cnn.com