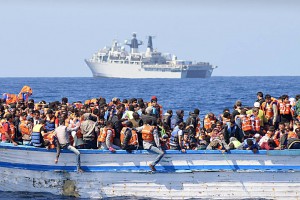 One person was killed and another seriously injured when a rubber dinghy carrying migrants headed for Italy came under fire off the Libyan coast on Monday,

Its not clear who was responsible for the shooting but Libya’s coastguard has denyed survivor reports that one of its patrol boats was involved.The incident happened just as EU foreign ministers meeting in Luxembourg agreed to use submarines, warships, and drones to gather intelligence against gangs who smuggle asylum seekers to Europe from Libya.

The operation which is launched today is limited to intelligence gathering until it has UN authorisation to capture and destroy smugglers’ ships.

The EU’s so called “Quick Response to the crisis” has been heavily criticised by Human Rights Organisations with Asylum Aid calling for safe legal routes to be the priority.

There has also been little “movement on a “quota” system”;http://www.euronews.com/2015/05/20/eu-refusal-to-accept-migrant-quotas-unacceptable/ suggested as a way to share the burden of those countries on the front line of the migration crisis.

The U.N. estimates that around 100,000 migrants have arrived in Italy, Greece and Malta since the beginning of the year. At least 3,000 have died in the attempt.