You are here: Home / Analysis / To defeat ISIS, arm the Syrian Kurds 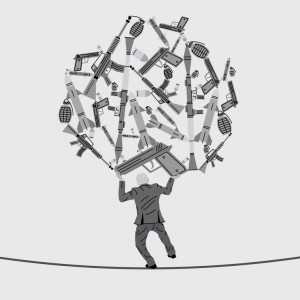 When President Trump presides over his first meeting of the National Security Council, possibly this week, he is likely to confront a decision whose urgency is matched only by its complexity: whether to arm Syrian Kurdish fighters poised to liberate the Islamic State’s Syrian stronghold in Raqqa, according to nytimes.com.

Taking back Raqqa, along with Mosul in Iraq — where Iraqi forces backed by the United States-led coalition have freed about half of the city — will effectively eliminate the Islamic State’s self-declared caliphate. The consequences for the Islamic State will be devastating. It will no longer control significant territory within which to train and harbor foreign fighters or exploit resources. It will lose the foundation of its most compelling narrative: the construction of an actual state.

As the noose around the Islamic State tightens, it has tried to adapt by plotting, inspiring or taking responsibility for indiscriminate attacks around the world: a nightclub in Orlando, Fla., a promenade in Nice, France, a cafe in Dhaka, Bangladesh, a square in Istanbul. Recruits are being told to stay home and attack there. Foreign fighters are being pushed out of Iraq and Syria, back to where they came from. The Islamic State directs its external operations from Raqqa. Hence, the urgency of Raqqa’s liberation.

The only fighters capable of seizing Raqqa belong to our most effective partner on the ground — the Syrian Democratic Forces, a mixture of Arabs and Kurds dominated by the People’s Protection Units, a Kurdish militia. The S.D.F. can succeed only if it is armed to overcome the Islamic State’s ferocious urban resistance of snipers, suicide bombers and improvised explosive devices.

In the last days of the Obama administration, the Pentagon said it would immediately seek permission from President Trump to do just that. It rightly wants to take advantage of the S.D.F.’s momentum in isolating Raqqa.

It is also determined to get the several hundred Special Operations forces President Barack Obama ordered into Syria the most effective partners possible.

So what’s the rub? Turkey — a NATO ally and key player in Syria — passionately opposes any American support to the Syrian Kurds, especially the protection units. It is angered by the militia’s links to the Kurdistan Workers’ Party, known as the P.K.K., a terrorist group that has plagued Turkey for decades.

The end of a cease-fire between the Turkish government and the P.K.K. has produced repeated attacks by the Kurdish group and a scorched-earth campaign by the government. Ankara argues that any aid the United States gives the People’s Protection Units militia will end up in the hands of the P.K.K. and be used to murder Turkish civilians.

As deputy secretary of state, I spent hours with my Turkish counterparts trying to find a modus vivendi for continuing American support to the Syrian Democratic Forces. At every juncture — from the liberation of Manbij in northeastern Syria to the isolation of Raqqa — they protested angrily and threatened repercussions, including denying the international coalition access to Incirlik air base and slowing counterterrorism cooperation. Anti-American rhetoric surged in the Turkish media. Each time, it took President Obama’s direct engagement with Turkey’s president, Recep Tayyip Erdogan, to smooth the way just enough to keep going.

If President Trump approves the Pentagon’s recommendation to arm the S.D.F., it will fall to him to keep Mr. Erdogan onboard — a first, highly charged test of his diplomatic skills. There is an art to this deal.

First, Mr. Trump should make clear that he has no more urgent priority than defeating the Islamic State — and that Raqqa cannot wait. Pushing the pause button in the illusory search for an alternative liberation force more amenable to Turkey would delay any move on Raqqa for months.

Second, any support we provide the Syrian Democratic Forces should be mission-specific — just enough to do the job in Raqqa, not enough to risk spillover to the P.K.K. United States Special Operations forces will have to ensure the S.D.F. is using resources only for its intended purpose.

We should insist that it commit to not use any weapons against Turkey, to cede liberated Raqqa to local forces, to respect Syria’s territorial integrity and to dissociate itself from the P.K.K.

Third, keeping the S.D.F. focused on Raqqa keeps it away from the Turkish-Syrian border — and any effort by Syrian Kurds to join the area they control in a contiguous Kurdish region or state. Turkish troops entered Syria to prevent the emergence of such a state. President Trump should clearly reiterate our own opposition to such a development.

Fourth, Turkey wants to take back the Islamic State-controlled town of Al Bab before the Syrian Kurds do. President Trump should back strong American air support for the Turkish operation there and reiterate our determination to help Turkey consolidate a broader buffer zone in northern Syria.

Fifth, Mr. Trump should double down on support for Turkey’s fight against the P.K.K., including helping find the group’s leadership holed up in Iraq’s Qandil Mountains.

Finally, the president must rethink last week’s executive order on immigration. At the very moment the Islamic State is on its heels, the order risks becoming a recruitment bonanza for jihadists while shutting America’s doors to the very people taking the fight to the Islamic State on the ground.