You are here: Home / Europe / ‘Time to act’ Italy to push for mass migrant deportations 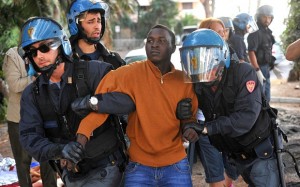 Paolo Gentiloni will take a much harder stance on the problem than his party colleague Matteo Renzi, under whose leadership hundreds of thousands of migrants entered the EU through Italy.

A two-page directive has reportedly been sent out to police stations across Italy ordering officers to increase efforts to deport economic migrants.

The document was drafted by chief of police Franco Gabrielli and part-published in Italian newspaper Courier della Sera.

Indicating fear of terror in Europe, the notice says the change is important to battle “a growing migratory pressure and an international context marked by instability and threats”.

Italy will open 16 detention centres for migrants under new rules where those detained will stay until deportation can be arranged.

Europhile Matteo Renzi said he could manage integration in Italy and refused investment in detention centres.

But wanes of migrants landed on Italian islands and scenes of chaos were broadcast over international news channels.

Last year the number of migrants arriving by boat increased by almost one fifth.

More than half-a-million have now arrived in Italy over a three year period – more than the entire population of Tuscan capital Florence.

Officials have said the death toll in the Mediterranean has now passed 4,400 for people travelling the perilous route from Libya to Italy.

The route is now the most used, taking over the Aegean Sea crossing to become the choice route for smugglers in Africa.

Under the Renzi leadership Italy had only 360 beds in four centres – despite 400,000 being identified as not having the right to stay in the country.

Since terror attacks in Berlin and Turkey there is an urgency in Italy to expel those who do night have the right to remain there.

The man behind the Berlin atrocity, in which a lorry was driven into a Berlin market, killing 12, arrived to the EU via Italy.

Tunisian Anis Amri arrived by boat in 2011 and was ordered to leave when freed from a detention centre in 2015 – however, he travelled on through Europe.

Beppe Grillo, leader of the Five Star Movement party in Italy said his country has become a crossroads for jihadis.

Mr Grillo has called for the suspension of the visa free Schengen agreement which allows easier travel across the bloc.

He wrote on his blog: “Until now it has been time for sorrow, sympathy, solidarity.

“It is time to act and protect.”