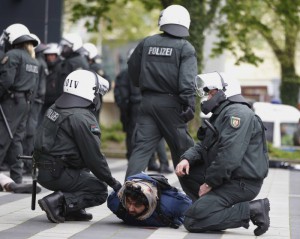 The German parliament has again tightened its anti-terror laws that now envisage lengthy jail terms and passport withdrawals for fighters who only consider travelling to conflict zones, local media report.

The new package of security laws makes plans of going to Syria or Iraq to wage a jihad alongside Islamist militants there punishable by up to 10 years in prison, the Deutsche Welle said. Previous editions of the law only envisaged criminal charges for actually visiting a terrorist camp.The new law now allows authorities to seize the passports of those deemed to be dangerous Islamists for up to three years. During this period, they will be issued replacement IDs that do not confer the right to travel abroad.

Opposition parties have already denounced the new legislation as “inappropriate, vague and disproportionate.”Wolfgang Bosbach, who heads the parliamentary committee for domestic affairs, told Sputnik on Tuesday that the laws were aimed at preventing potential fighters from joining conflicts in the Middle East, in a bid to roll back Islamic State insurgency.

Security in Germany was tightened in early 2015 following a string of Islamist attacks in the French and Danish capitals.