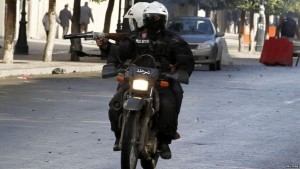 Three Tunisian police and a suspected jihadi were killed Monday in clashes in the center of the country, the interior ministry said.

“The national guard attempted to ambush at dawn two terrorists on a motocycle in Sidi Ali Ben Aoun,” ministry spokesman Mohamed Ali Aroui told AFP, adding that three officers and one militant were killed in the ensuing shoot-out.