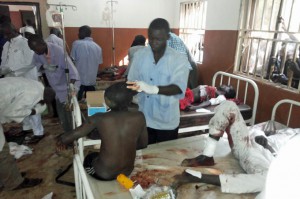 Three students were killed with at least twenty others injured when Boko Haram attacked
the college of Administrative and Business Study ( CABS), Potiskum in Yobe State.

Vanguard gathered the insurgents stormed the school around 8:30am Friday.

A reliable source who witnessed the Book Haram onslaught said, the insurgents numbering about five armed with gun entered the school  premises through the main gate after killing the security guard and open fire randomly on the innocent students killing three of them in the process.

The source added that, one of the insurgents died as a result of I.E.D strapped to his chest that exploded, and injured over 20 students. As at the time of filling this report, medical workers were busy evacuating the injured victims. Meanwhile, the security have step up their condoned search in Damaturu the state capital and potiskum where the incident occurred.