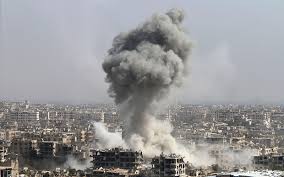 At least three Russians fighting alongside Syrian government forces were killed and several more wounded when a shell hit their position in the coastal province of Latakia, a senior pro-government military source said on Tuesday.

If confirmed, the deaths which occurred on Monday night would be the first known incident of Russians killed in Syria since Moscow began air strikes in support of President Bashar al-Assad on September 30.

Syrian officials could not be reached for comment. Russia’s defence ministry did not respond to requests for comment.

Rami Abdulrahman, head of the Syrian Observatory for Human Rights, which monitors the conflict, told Reuters that his sources in the area had confirmed the deaths of Russians, but did not have a figure. He said he believed they were not regular Russian forces but volunteers.

The pro-government source, who is familiar with military events in Syria, said that at least 20 Russians were at the post in the Nabi Younis area when the shell struck.

“It’s a 90 percent probability that the shell was fired by the militants,” he told Reuters, referring to insurgent groups that the Syrian army, backed by Lebanon’s Hezbollah and Iranian fighters, has been battling in the area.