You are here: Home / West Asia / Three police officers gunned down in early-morning attack in Pakistan 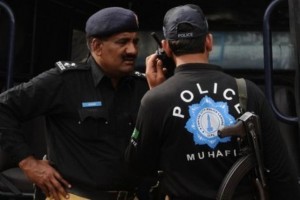 Three police officers have been gunned down by unidentified gunmen in early-morning attack in Pakistan.

According to reports sub-inspector Sikandar and constables Ashraf and Asif were still on their night shift duty when unidentified gunmen opened fire on them in Aziz Abad area of Pakistan’s business hub of Karachi early on Wednesday morning.

All three police officers died on the spot while a fourth one sustained injuries.

Reports also suggest the attackers were four people who came on two motorbikes and after spraying bullets on police van with their 9mm pistols runaway from the area.

No group has immediately claimed responsibility for the attack but security forces cordoned off the area following the incident and launched an investigation into it.