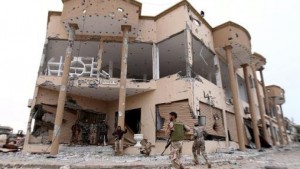 Three Libyan soldiers were killed and 11 wounded when a suicide bomber blew himself up in central Benghazi on Tuesday, a medic and a military source said.

Suicide bombings have become frequent in the eastern port city, where forces loyal to the country’s internationally recognised government have been clashing with Islamist fighters, part of chaos gripping the oil producer.