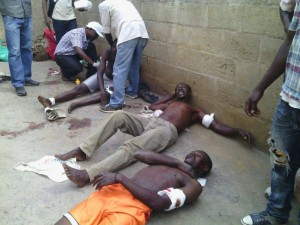 Three people were killed and several wounded in a grenade attack on a bar in the Burundian capital Bujumbura late on Monday, police said, as the impoverished nation faces the prospect of a return to civil war.

Burundi sank into a crisis last year after President Pierre Nkurunziza ran for a third term of office, which he secured in a disputed vote.

U.N. officials say the crisis has brought the nation to the brink of a new civil war, after it emerged from a 12-year, ethnically fuelled conflict just a decade ago.

Pierre Nkurukiye, the police spokesman, said a senior police officer, a lawyer and a civil servant were killed in the attack that took place in the Bwiza neighbourhood.

Witnesses said the attackers used a motorbike to get to the scene and to flee after the explosion. Police arrested several youths in the area after the attack on the bar that is popular with Nkurunziza’s supporters, the witnesses added.