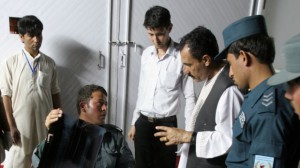 A suicide bomber attacked a police station in the provincial capital of Afghanistan’s southern Helmand province, killing three people, a doctor at a local hospital that received the bodies said Monday.

But Dr. Darwesh at the Emergency hospital, an international charity, said it had received the bodies of two policemen and one civilian. Another 11 people wounded in the attack are being treated there, he said. He asked that his last name not be published because he was not authorized to brief the media.

The Taliban claimed responsibility for the attack in an email to media.

Helmand province is a stronghold of the Taliban, who have been fighting the Kabul government for more than a decade.

The group controls much of the poppy crop that is grown in the province, which is the source of most of the world’s heroin.

For more than two months, Afghan security forces have been fighting to dislodge the insurgents from Helmand, ahead of the warmer weather when the Taliban send seasoned fighters across the mountainous border from Pakistan for what it calls its “summer offensive.”

The group has not declared the beginning of the fighting season, but recent attacks indicate that the annual offensive has begun.

On Saturday, a suicide bomber on an explosives-laden motorbike blew himself up outside a bank in the eastern city of Jalalabad, killing at least 35 people and wounding around 125, authorities said.

The Taliban, who have long been active in Nangarhar province, where Jalalabad is the capital, denied carrying out the attack. President Ashraf Ghani attributed the attack to the Islamic State group, which has a small but growing presence in the country, though he did not reveal the source of his information.