A terrorist attack on a police station has left two officers and three militants dead in Russia’s Chechnya Republic, according to presstv.com 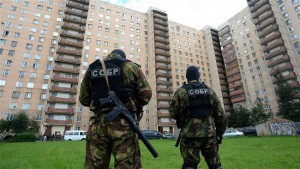 Head of the Chechen Republic Ramzan Kadyrov’s office said in a statement on Monday that militants attacked a police post in Chali, a town about 30 kilometers south of the capital, Grozny.

The fatalities occurred when the policemen engaged in a firefight with the assailants, according to the statement.

Two civilians were wounded in the clashes.

A group of extremist militants are fighting in Chechnya and across the volatile North Caucasus. The group sporadically launches terrorist attacks against authorities and police forces in the region.

In late 2016, militants staged an attack against police forces in Grozny. Security forces said at least 11 militants were killed and one traffic police was injured in that attack.

Thousands of Chechen militants have also reportedly been fighting alongside the Takfiri Daesh terrorist group, mainly in Syria. Russian authorities consider the Chechen militants fighting abroad a serious threat if they manage to get back to Russian territory.