You are here: Home / Mediterranean / Three including civilian killed in attack on checkpoint in northern Egypt 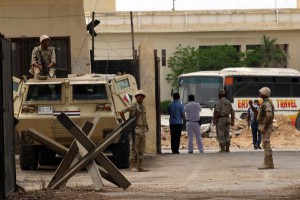 An attack on a checkpoint in a village in Egypt’s northern Sharqiya province left two watchmen and a passerby dead on Sunday, security sources said.

The attack also left four people injured, the sources added. Unidentified assailants on two motorbikes shot at the checkpoint, according to a notice filed to the Sharqiya security directorate.

Security forces set up checkpoints and sent out patrols to comb the site and identify the perpetrators.

Bombings and shootings targeting security forces have surged since the military ouster of Islamist president Mohamed Mursi in July 2013, following mass protests against his rule.

Most attacks first occurred in the Sinai Peninsula, yet they have crawled into other parts of the country, including the capital.