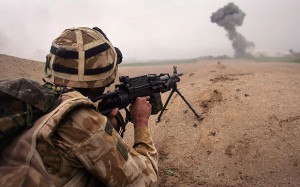 Three British special forces soldiers were reportedly wounded in an ambush by Isil fighters in Iraq.

The men from the SAS and its naval counterpart, the SBS, were part of a 25-strong unit of allied troops from British, German and US special forces, spying on Islamic State in Iraq and the Levant (Isil) positions near the northern city of Mosul, the Daily Mirror said.

They suffered shrapnel injuries when they were fired upon with rocket propelled grenades and 50-calibre guns, the newspaper reported. After receiving treatment on the ground they were given a medical evacuation back to Britain, where they are recovering.

The injuries are believed to be the first major military injuries to British forces in the ground war against Islamic State – but according to the Mirror, the bravery of the troops has not been acknowledged because ministers do not want to confirm British soldiers are engaged in a war on the ground with Isil.

The allied forces are said to have called in an air strike to tackle the fighters, who mounted the attack from captured US Humvee vehicles armed with heavy machine guns.

A German commando team of eight men are believed to have used missiles to kil several enemy gunmen.

Around 30 Isil insurgents were killed in the 15-minute firefight that took place around 10 miles south of the city’s airport last week and an air strike that followed.

A source told the newspaper: “The enemy were up to 30 strong and heavily armed.

“An air strike was needed to resolve it.”

The UK is taking part in air strikes on Iraq and Syria in areas held by Islamic State. British troops are also providing training to Iraqi security forces.

British RAF warplanes are now switching their focus from supporting Kurdish and Iraqi troops inside Iraq to hitting Isil command centres and supply lines across the border in Syria.