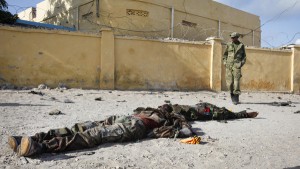 Three Al Shabaab militants were killed in fierce fighting after the Al Qaeda-allied insurgents launched an attack on a government military base in Jala-laksi district of Hiran region in central Somalia.

“They attacked our military base, but the forces stopped them. We have managed to kill three of the attackers while the others fled away from the scene,” Fidow said.

He said the military officers later launched security operations in the region and arrested several suspects who were being investigated for various incidents of insecurity in the region.

“We will investigate them and later release innocent people while those found with offences will be taken to court,” Fidow added.

The official also said that the situation was calm, denying there were casualties among the security forces.

The Al Shabaab has not claimed responsibility, but the group has carried out similar terror attacks before, vowing to intensify attacks on government bases and African Union peace-keepers during the Muslim holy month of Ramadan.