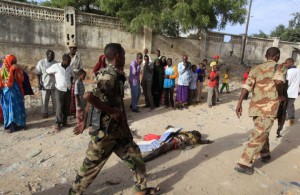 Police commander of Mogadishu’s Heliwa District Khalif Abdulle Mo’allim confirmed the death of the three militants who attempted to storm a police station.

“We managed to foil an attempt by Al-Shabaab militants to raid the police station and three of them died in the gun battle. The public alerted us about the presence of the terrorists and we acted promptly, Mo’allim told reporters.

He added the security forces were on high alert to thwart any attempt by All-Shabaab militants to launch an attack on government facilities or residential premises.