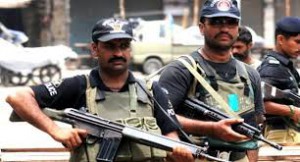 Three members of Al-Qaeda ‘finance team in Punjab province’ have been arrested from a house in Raiwind, located a few kilometres from Lahore residence of Pakistan Prime Minister Nawaz Sharif.

A team of the Counter-Terrorism Department (CTD) of the Punjab government in collaboration with an intelligence agency yesterday raided a house in Raiwind and arrested three members of Al-Qaeda, says an official of CTD.

The Al-Qaeda members have been identified as Tariq Aziz, Abdul Ghaffar and Mehar Hamid Ali.

According to the CTD, cash, weapons and hate literature have been recovered from their custody.

The CTD said the suspects were involved in collecting finances for Al-Qaeda besides facilitating terrorists to carry out their activities in the province.

A case has been registered against them under Anti-Terrorism Act.