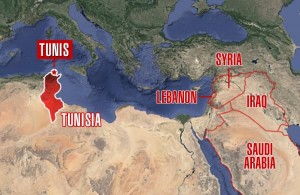 A terrible irony of the Arab Spring revolution is that Tunisia emerged from it with what looked like the most successful and democratic outcome.

The revolution’s supposed best success story has actually given birth to a new society that produced thousands of jihadists and Islamic State ’s largest foreign influx of fighters.

On 26 June 2015, 38 people – including 30 Brits – at the Port El Kantaou resort were slaughtered by ISIS gunman Seifeddine Rezgui in the deadliest terror attack in the history of modern Tunisia.

It is suspected that 7,000 Tunisians have joined Islamic State .

The country’s proximity to neighbouring Libya, whose own revolution and availabilty of ungoverned space opened the way for al-Qaeda and then ISIS., has encouraged jihadists.

And the massive freeing up of Gadafi’s weapons to terror groups has made death dealing instruments readily available across borders to jihadists in the region.

The sudden collapse of the Tunisian dictatorship in the 2011 revolution and the establishment of democracy gave extremists breathing space and freedom to organise themselves.

Many feel Tunisia’s security apparatus was fatally weakened by sudden reforms as the jihadi movement grew and grew.

And as we have seen in Iraq and elsewhere a rise in unemployment meant many young men had nowhere to turn and sought meaning from extremist Imam’s.

Many people suspect as many as 30% of young people are unemployed in Tunisa who witness dwindling opportunities – especially in the now crippled tourism industry.

The terror threat has put Tunisia in a self-propelling downward spiral and made it an increasingly dangerous – not only as a country to visit but also as an exporter of jihad-related terrorism.