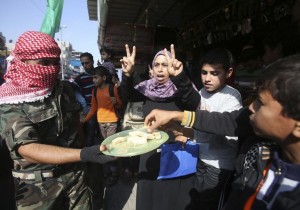 On Jan. 8, 2017 a Palestinian Arab named Fadi Ahmad Hamdan Qunbor used his truck to intentionally run over 21 Israelis in Jerusalem, murdering four and injuring 17 others. The terror attack was halted when Israeli authorities shot and killed Qunbor, who reportedly put his vehicle into reverse in order to repeatedly run over his victims, like reported by camera.org .

It didn’t take long for some Palestinians and their leaders to celebrate the murders.

Hamas, the U.S.-designated terror group that rules the Gaza Strip, praised the attack. According to Reuters, “thousands of Hamas activists and supporters took to the streets of Jabalya refugee camp in Gaza on Sunday night to rally against Israel and praise the terrorist ramming attack (“Hamas holds rally to celebrate terrorist ramming that killed 4 Israelis,” Jan. 9, 2017).”
Terrorist/news executive celebrates terror

Fathi Hammad, a top Hamas leader, told Reuters, “The message of our Islamic party Hamas is a message of encouragement and support for every jihadi who carries out an attack that puts an end to the acts of the Zionist enemy.” As an Oct. 5, 2016 CAMERA Op-Ed in The Washington Examiner noted, Hammad is the head of Hamas’ propaganda arm, which oversees, among other things, al-Aqsa TV. As CAMERA pointed out, some news outlets and organizations, such as the Newseum, a Washington D.C.-based museum, treat al-Aqsa TV as a credible news source instead of the terrorist entity that the U.S. government officially considers it.

Shortly after the most recent terror attack, footage appeared of Palestinians taking to the streets and passing out candy and other sweets in celebration (see here and here, for examples). The Twitter hashtag “TruckIntifada” even briefly trended.

Palestinian Media Watch (PMW), a non-profit organization that monitors Arab media in the West Bank (Judea and Samaria), the Gaza Strip, and eastern Jerusalem, noted official Palestinian Authority media praised the “car ramming operation.” PMW pointed out that, “according to its fundamental policy of supporting all Palestinian terror, the PA will reward the terrorist’s wife with a lifetime monthly allowance. According to PA law, the family of a Shahid [martyr] receives a base payment of 1400 shekels per month.”

Fatah, the movement that dominates the PA and Palestine Liberation Organization (PLO), has previously encouraged Palestinians to commit vehicular attacks.

PMW has documented numerous examples of Fatah, the PA and the PLO inciting such attacks via cartoons and images on social media that depict cars running over Jews.
Where’s the coverage?

Despite such evidence, many Western news media outlets often omit the incitement to anti-Jewish violence that precedes and frequently follows Palestinian terrorist attacks.

USA Today managed to do even worse. In a noticeable omission, the paper—in contrast to its reporting of Islamist vehicular attacks in France and Germany—failed to offer any print coverage of the attack.

A terrorist commits a mass casualty terror attack in Israel—and “thousands” in Palestinian society celebrate his deed. Where’s the coverage?