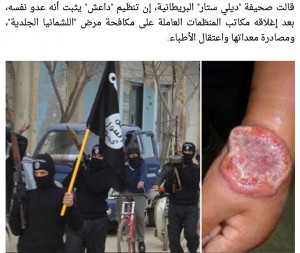 As global powers continue to debate the best way to deal with the threat of the self-proclaimed Islamic State, the terrorist group appears to be suffering its own internal problems. Poor hygiene and pollution has led to the spread of a debilitating disease known as the Rose of Jericho.

As the Islamic State fights for control of large swaths of Syria of Iraq, the group has turned Raqqa into their self-proclaimed capital. But unsanitary living conditions have turned the city into a hotbed for leishmaniasis, also known as the Rose of Jericho.

Spread by female sandflies, the disease is caused by protozoan parasites which cause large, open wounds. Once bitten, red sores on the skin can erupt within weeks, and the virus can eventually attack the body’s vital organs. Other symptoms include fever, a low red blood cell count, and an enlarged spleen or liver.

According to the Mirror, over 100,000 cases have been reported, and leishmaniasis can be fatal if not treated.

And most of the infected are, in fact, not being treated. Many fighters, for unspecified reasons, are refusing treatment. But even if they consented, there are few people left in the city capable of handling the outbreak.

While doctors from Medecins Sans Frontieres were initially trying to treat the infected, most have fled Islamic State-controlled territory. Major medical centers have shut down, and the only people left to doctor the fighters are locals with relatively little experience.

Throughout history, the disease has gone by various names, including “white leprosy,”  “black fever,” and eventually, “Jericho buttons,” due to an outbreak near the city of Jericho in the early 20th century.