You are here: Home / Africa / Thousands flee Niger for Chad in fear of Islamist Boko Haram 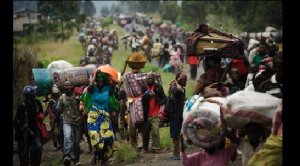 Fear of Boko Haram attacks has driven at least 7,000 people from Niger to seek refuge in Chad in the last week, and thousands more may cross the border if the violence escalates, the United Nations said, like reported by japantimes.co.jp.

The recent arrivals in Chad’s Lake region felt compelled to leave Niger after attacks by Islamist Boko Haram militants on their village and neighboring communities in the southeastern Diffa region, according to the U.N. refugee agency (UNHCR).

Diffa has seen intense fighting over the past year between Niger’s army and Boko Haram militants. The region hosts almost a quarter-of-a-million uprooted people, from Niger and Nigeria, who have been forced to flee their homes by the violence.

“The new arrivals fled into Chad because they were scared of Boko Haram attacks … after a few took place recently,” UNHCR official Edward O’Dwyer told the Thomson Reuters Foundation.

“They also said they felt exposed after Chad scaled back the number of troops in Niger due to a lack of resources,” he added.

Those who crossed the border into Chad said at least 10,000 more people could follow suit imminently due to fears over their safety in southern Niger, according to the U.N. agency.

Suspected Boko Haram fighters killed nine people and abducted dozens more in southern Niger last month, while female bombers killed two and wounded 11 at a U.N.-managed camp for the displaced in the first suicide attack in the region in a year.

This violence has stoked fears about Niger’s inability to stop Boko Haram crossing the desert border from their bases in Nigeria, with the frequency of the militants’ attacks having ramped up recently as their eight-year insurgency rages on.

Their bid to carve out an Islamic caliphate in the Lake Chad region has killed 20,000 people and forced at least 2.7 million to flee their homes across Cameroon, Chad, Niger and Nigeria.

“We are concerned that if the security situation deteriorates in Niger, more and more people will flee to Chad,” said O’Dwyer, adding that the UNHCR had a contingency plan prepared to provide aid in case of a spike in arrivals.

The U.N. agency said it had delivered items such as plastic tarpaulin and blankets to those uprooted from Niger, who have set up an informal camp near a site hosting Nigerian refugees.

Chad’s Lake region is home to at least 100,000 Chadians uprooted by violence, and 8,000 Nigerian refugees, says the U.N. Office for the Coordination of Humanitarian Affairs (UNOCHA).