You are here: Home / Analysis / This is why the UN Security Council must recognize Hamas as an Islamic terrorist organization 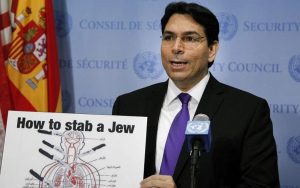 Israel’s Ambassador to the UN Danny Danon called on the UN Security Council to recognize Hamas as a terrorist organization in light of its planned emergency session, set to take place on Wednesday according to jpost.com.

“The fact that the Security Council is holding a discussion on Hamas attacks against Israeli citizens is a positive step. But the Council members must also take action and not be satisfied with words only,” Danon expressed.

“I call on the Security Council to formally recognize Hamas as a terrorist organization. It is time to fight the Palestinian terror leadership just like we fought the leadership of al-Qaeda and ISIS.”

American Ambassador to the UN Nikki Haley strongly condemned the latest round of mortar and rocket fire emanating from the Gaza Strip on Tuesday and called for an emergency session of the UN Security Council to be held.

“The Security Council should be outraged and respond to this latest bout of violence directed at innocent Israeli civilians, and the Palestinian leadership needs to be held accountable for what they’re allowing to happen in Gaza,” Haley said in a statement.