You are here: Home / MidEastGulf / This is terrorism: We could ‘come suddenly one night,’ Erdoğan warns Iraqi Kurdish government 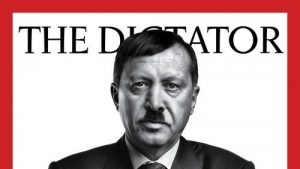 President Recep Tayyip Erdoğan hinted on Sept. 25 that Turkey could launch an operation to the Iraqi Kurdish Regional Government (KRG) if necessary, citing a previous operation in northern Syria.

“We have a 911-kilometer border with Syria. We will never allow such a formation of [states]. As I said earlier, we might come suddenly one night. We did this with the Euphrates Shield Operation [in Syria]. All options are on the table regarding Iraq and Syria. We are now taking a new step, just like we cleared a 2,000-square kilometer area of [the Islamic State of Iraq and the Levant] ISIL, and we will not refrain from doing it in Iraq,” Erdoğan said.