You are here: Home / MidEastGulf / This anti-Daesh leaflet just showed up in Hama, but Twitter says it’s not from the US

Russia’s new position in Syria shot into clear focus again this week following Syrian President Bashar al-Assad showed up for a surprise visit in Moscow, but the country’s allegedly making its voice heard on the ground in another way that involves Baghdadi and his Rolex.

Social media users circulated photos Wednesday of an an anti-Daesh leaflet they say was dropped by Russian aircrafts in the Syrian city of Hama. Here is it. 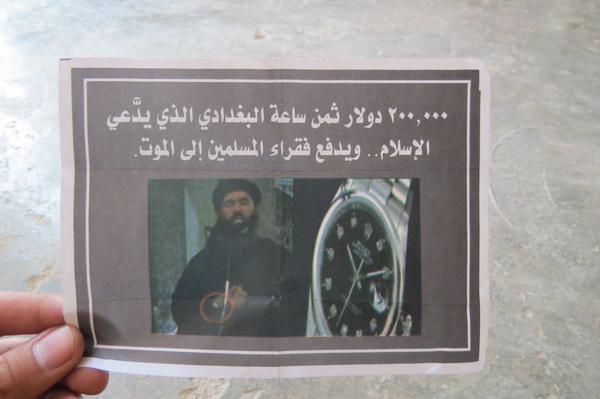 The watch appeared on the wrist of Daesh leader Abu Bakr al-Baghdadi during his caliphate-announcing speech last year in Iraq and sparked plenty of snarky quips back then. Trolling onlookers mused about whether—and why— the elusive leader had on such a shiny toy. Was it a Rolex? An Omega? It also produced this. (Via Twitter)

So far, neither the flyer nor its source has been confirmed. Meanwhile, social media users also pointed out it was showing up in areas not controlled by Daesh, but by rebels.

In either case, it wouldn’t be the first time things like it have shown up in Syria.

Counter-propoganda tools like this are a favorite in US strategy fighting Daeh in Syria and Iraq. Videos discouraging extremist recruitment are frequently disseminated online by the the US State Department’s Think Again Turn Away program. US warplanes have also dropped several of their own versions of anti-Daesh leaflets since the group’s first rise to power in swaths of northern Iraq last summer—recall the gory Daesh meat-cleaver?