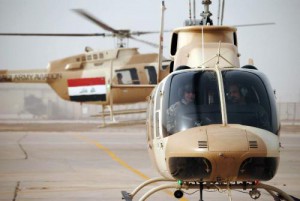 Medek said the training of the helicopter pilots is organised by the LOM Praha state firm.

The Defence Ministry corrected its original information after Aero Vodochody that will resell 15 L-159 aircraft from the Czećh military stock to Iraq dismissed the information about 31 pilots of L-159 planes.

Aero Vodochody President Ladislav Simek said “the training of the L-159 pilots is part of the contract [between Aero and Iraq] for the supply of L-159 aircraft that took effect on June 29.”

The contract was signed in April 2014, but it was taking effect gradually, Simek said.

In addition to the pilots, the training of the ground staff to take care of the combat planes in Iraq is also being prepared in cooperation between the military and Aero Vodochody.

The sale of the redundant L-159 aircraft to Iraq has been subject of negotiations for several years. The agreement started to assume a definite shape one year ago and the government approved the sale in March. The Czech Republic was to get 750 million crowns for the aircraft but the figure was later raised to 780 million crowns in view of exchange rates oscillations.

Defence Minister Martin Stropnicky told journalists Thursday that the Defence Ministry had already received 620 million crowns that would be enough for the military to have three one-seat planes from its reserves rebuilt into two-seaters by Aero Vodochody.

About 100 million from the sum should be left at the ministry, he added.

The transaction is now up to Aero Vodochody and Iraq, Stropnicky said.

As Iraq has paid the deposit, the ministry believes that the deal will be successfully completed, he noted.

Iraq plans to deploy the Czech combat planes in the fights against Islamic State.

The Defence Ministry agreed with Aero Vodochody on the supply of 15 L-159s for the Iraqi military for 750 million crowns at the end of last August. The firm will purchase the planes from the Czech military and sell them to Iraq, since this procedure is required by law.

The Czech Republic has tried to sell the redundant L-159s for many years.

In July 2014, the Defence Ministry and Aero Vodochody signed a contract on the basis of which Aero would sell some redundant L-159s to the U.S. company Draken International.

The Americans are to pay up to 220-250 million crowns for 14 planes. They also gained an option for another 14 planes.

However, the Czech Republic can reduce the number if it sells some planes to Iraq.

The Czech military does not need 32 combat planes L-159 planes. It bought 72 L-159s made by Aero-Vodochody for 51 billion crowns in the past.