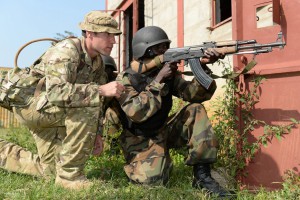 In her first deployment of troops since becoming Prime Minister, Theresa May announced British soldiers will help train the Somali national army combating the terror group, which has carried out numerous atrocities in the region.

The UK will send up to 30 training missions of between five and 30 personnel to Somalia in areas including the capital Mogadishu. A maximum of 70 British troops can be deployed at any one time.

The Prime Minister also yesterday outlined plans to spend £100m in aid to discourage people from making the perilous journey from Africa to Europe.

Some £20m will be spent to help Somalia take back families from refugee camps in Kenya, while a further £80m will help Ethiopia to provide jobs for migrants from Eritrea.

“The biggest threats to our prosperity and security do not recognise or respect international borders. And if we only focus on what we do at home, the job is barely half done.” she said at the UN General Assembly.

“As we are seeing in Jordan, Lebanon and Turkey, when the right assistance is provided, solutions that provide sanctuary and opportunity to refugees, and opportunities for those hosting them, can be found.”

She added that her approach was “good for the refugees and the countries they come from, because the closer they stay to home, the easier it will be for them to return and rebuild after the conflict”.

A Downing Street source told The Times: “What we are seeing here is the PM delivering on root cause. The more we do earlier on overseas the better we can protect people at home.”

The money to Ethiopia is aimed at creating 100,000 jobs, on the condition that 30,000 of those are directed to migrants from Eritrea.

Britain currently has 65 troops in Somalia, but the new deployment will double their strength.

Mrs May argued the UK has been at the forefront in the fight against al-Shabaab.

She said: “Since 2010, with huge support from across the region, and critically the commitment of Somalis themselves, al-Shabaab has been driven from all the major cities it used to control.

“It is vital that as an international community we continue to support countries in the region that are contributing thousands of troops, and that we continue to build the capacity of Somali security forces.”