You are here: Home / Analysis / There will be blood: West Bank violence may increase 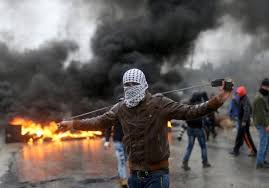 In September, a warning from the chief of staff of the Israeli armed forces, Gadi Eizenkot, that there was a high probability of violence in the West Bank passed without much notice. But Israeli and American officials would be wise to pay attention, as such a warning is credible, like reported by carnegie-mec.org.

The danger is not that the leadership of the Palestinian Authority will seek a confrontation with Israel, as most indications suggest the contrary. Rather, violence may erupt as a consequence of the despair that is rampant among Palestinians, mounting pressure from the Trump administration, and the lack of any viable option for a peaceful resolution of the conflict with Israel. Just as the first Intifada erupted spontaneously, a new outbreak could come at any time, fueled by a population that feels it has little to lose.

According to Israeli press reports, Eizenkot warned the Israeli security cabinet that there was a “60–80 percent chance” of a major outbreak of violence by Palestinians in the West Bank. He reportedly attributed the increased risk to several factors: U.S. measures against the Palestinians, including cuts in aid; the loss of Arab support for Palestinians; the failure of reconciliation efforts between Fatah and Hamas; the Palestinians’ perception that their security forces in the West Bank are aiding Israel; and uncertainty over the longevity of 83-year-old Palestinian President Mahmoud Abbas.

It was especially noteworthy that Eizenkot highlighted U.S. pressure on the Palestinians as a potentially destabilizing factor. Such pressure has been a central element of the Trump administration’s approach to the Israeli-Palestinian conflict. The anti-Palestinian moves began with the decision in late 2017 to recognize Jerusalem as Israel’s capital and move the U.S. embassy there, breaking with decades of U.S. policy. Then came a cutoff in assistance—not only economic assistance to the Palestinian Authority (PA) but also humanitarian assistance to private hospitals in East Jerusalem unaffiliated with the PA as well as to people-to-people programs promoting contacts between ordinary Israelis and Palestinians. The administration also ended all U.S. funding for the United Nations Relief and Works Agency (UNRWA), the U.N. body that provides health, education, and social services to Palestinian refugees.

Finally, the U.S. ordered the closure of the Palestine Liberation Organization mission in Washington. Israeli press reports suggested that the Israeli armed forces and the security services told the Israeli government that rapid cuts in U.S. assistance to the Palestinians and UNRWA could be destabilizing. However, Prime Minister Benjamin Netanyahu ignored these warnings and signaled his support for President Donald Trump’s decisions.

Eizenkot’s warning may have been informed by a recollection of the events that led to the outbreak of the first Intifada in 1987, another period when peace efforts had run their course and the Arab world was focused elsewhere. In 1982, U.S.-Israeli-Egyptian talks on autonomy for the West Bank and Gaza that were part of the Camp David Accords had ended in failure. In mid-1987, progress between Israeli Foreign Minister Shimon Peres and King Hussein of Jordan on a so-called “Jordan Option” had been torpedoed by then-Israeli prime minister Yitzhak Shamir. When the Arab League summit convened in Amman in November 1987, Arab leaders were preoccupied by the Iran-Iraq war and gave little attention to Palestinian concerns. In December 1987, with scant hope for a resolution to the conflict and little support from the Arab world, the Intifada broke out spontaneously in Gaza’s Jabaliya refugee camp, before spreading rapidly throughout the occupied territories.

Events rarely repeat themselves exactly as in the past, and Israel’s armed forces are better positioned today than they were in 1987 to deal with an outbreak of violence. They are no longer deployed inside major Palestinian population centers, and the PA security forces can control limited protests on their own. However, frequent incursions by Israeli forces into Palestinian-controlled areas and the many settlers moving around daily inside the West Bank offer points of friction, and possible targets for attacks. The standoff along the Gaza border also has the potential to turn into a nasty conflict between Israel and Hamas, and could trigger clashes in the West Bank.

It is in this volatile environment that the Trump administration is planning to present its peace plan, the so-called “deal of the century.” While the details and timing of such a plan remain unclear, recent comments by Trump before the United Nations General Assembly suggest that his preferred approach is a two-state model, but with many of the key issues—Jerusalem, refugees, security—addressed in a way that favors Israeli interests.

While the Palestinian reaction to such a plan will inevitably be negative, Abbas has consistently opposed violence and maintained security coordination with the Israelis. He continued to do so even after the steps taken by the Trump administration. But Palestinian anger and hopelessness could lead to an explosion, despite Abbas’ preferences and the efforts of his security forces.

The Trump administration should be mindful of this reality and avoid steps that further inflame the situation. Misguided American actions could be harmful not only for the Palestinians but for Israel as well. If the administration truly wants to advance peace, it must rethink its hostile approach to the Palestinians and devise a plan that takes into account the vital interests of both parties.