You are here: Home / MidEastGulf / There are signs Canadian commandos are battling ISIS in northern Iraq 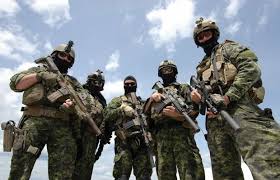 Canadian special operations forces are continuing to advise and assist Kurdish forces as they battle ISIS in a major offensive in the northern part of Iraq, an operation that brings with it the strong likelihood Canadian commandos are in combat today.

The Department of National Defence refuses to discuss what Canada’s military advisers are currently up to, citing operational security. But following a series of queries from CBC News, it confirmed Canada’s special forces have had no change to the mandate that allows them to accompany Kurdish forces up to and across front lines and into battle.

The mission’s parameters also include target acquisition and terminal guidance operations: the calling in of air strikes by ground troops against enemy forces.

“Operation Impact… continues for the time being under the mandate previously directed by government,” Capt. Kirk Sullivan said in an email.

“In order to maintain operational security, no further information regarding ongoing and future operations is available at this time.”

The combat question is significant because in opposition, Justin Trudeau accused the Conservative government of misleading Canadians by not disclosing the fact that special forces advisers were at the front lines engaging in the directing of bombs against ISIS targets. The Liberals defined this as combat, as have former generals since then.

The party opposed the extension and expansion of this combat mission, in part because of the government’s alleged deception.

Trudeau vowed to pull out of bombing

Then during the campaign, the Liberal Party promised to end the combat mission in Iraq.

That was before this week’s attacks in Beirut and Paris.

Before he boarded a plane to the G20 summit on Friday night, the prime minister was asked whether events would cause him to reconsider.

“It’s too soon to jump to any conclusions,” he said.

As of now, under Trudeau’s new Liberal government, Canadian Forces are not just engaging in combat, they are engaging in the largest combat mission in Iraq in some time. Sunday saw Canada’s CF-18 jets hit ISIS fighting positions near Haditha, Iraq.

On Thursday, the government confirmed Canadian military participation in the operation to take back the important Iraqi town of Sinjar from ISIS fighters.

Friday, a Pentagon briefing shone more light on that effort, which is now understood to be a massive offensive by Iraqi security forces and Kurdish allies across Iraq’s north and even into Syria.

Col. Steven H. Warren, a U.S. military spokesman in Baghdad, described the intense efforts and said Kurdish forces from the Erbil region — where Canadian troops are advising — participated in the fight.

Warren referred to coalition efforts in aid of Iraqi security forces, including Kurds.

“Our advise and assist forces positioned themselves primarily… on the north side of [Sinjar] mountain where the Kurd commanders positioned themselves, with the mission really to advise these Kurd commanders on how to synchronize the flow of forces into the battle, on how to refine their ongoing logistics operations, and how to do things like triage wounded and how to manage their casualty collection sites and things like this. Genuine advise and assist,” Warren said.

“There were a handful of personnel on top of the mountain helping the Peshmerga forces identify and develop targets down there on the ground.”

It’s not certain that Canadian forces on the ground were engaged in the Sinjar operation, but the military has so far refused to say they were not.

It’s in this last area, a high-end military skill set, that Canada is likely most active in today.

In his briefing in January, Rouleau said this training happened well behind the front lines and represented about 80 per cent of Canada’s work on the ground in Iraq.

“The other 20 per cent or so happens in forward positions, mostly close to the front lines, but sometimes right at the front lines if that is the only place from where we can accomplish it,” he said.

In that briefing, Rouleau referred several times to Canadian operations in the Sinjar region, where the fresh fighting in happening now.

On background, military sources say it will take a decision from cabinet or a letter from the prime minister to alter the Canadian Forces mission in Iraq. Until that arrives, it’s business as usual.

‘Canada has a lot to offer’

In an exclusive interview with CBC News on Thursday, Sajjan said the government was consulting with allies to ensure a responsible transition. Sajjan said it was important for Canada’s allies to be in on the thinking about any any new plan.

“When we look at fighting ISIS and the overall picture, it’s not just strictly about the air campaign. Canada has a lot to offer. We want to make sure that anything we do as part of that is going to have a meaningful impact to the mission,” Sajjan said. “And right now, we feel that a training role could be one of those things.”

The military already is planning how best to implement the government’s direction, and training is indeed at the top of the list.

Canada’s special forces, while capable, are small in number and it’s said that increasing Canadian training in areas like medical aid and countering improvised explosives would most likely require the use of conventional Canadian forces.

That sort of mission would most closely match the work Canada did in Afghanistan following the end of the combat mission there in 2011.