You are here: Home / Africa / The women fighting Boko Haram 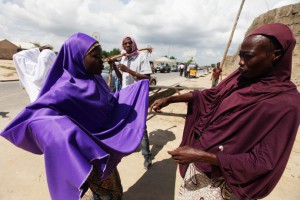 Fatima Muhammed had taken a quick break from the canteen she runs in Maiduguri, a rambling city in northeastern Nigeria, but she was still fielding calls from demanding customers. Dressed in a maroon hijab, she would put her phone down, only to have to pick it up again a few minutes later. We were at the house of her former commander, Abba Aji Kalli, who ran a sector of the Civilian Joint Task Force (C.T.J.F.), a vigilante group battling Boko Haram, in Maiduguri and its environs. Muhammed is the sole female member of the sector, and one of less than fifty women in C.T.J.F., which is said to have about ten thousand fighters and is known for being more effective than the Army, and increasingly powerful.

Still, more than a thousand people have died from Boko Haram attacks since President Muhammadu Buhari took office at the end of May. And more than a hundred people have been killed in northern Nigeria after multiple explosions since October, several of them by suicide bombings set off by girls under the age of fifteen. (Officials believe that many of the female bombers were forced to detonate themselves). Over a six-year insurgency, Boko Haram has forced two million Nigerians from their homes, with upwards of one million refugees in Maiduguri, according to Doctors Without Borders, and hundreds more refugees coming each week, leaving rural outposts vulnerable to attacks.

“They will kill you, they will kill everyone you know,” Muhammed said, of Boko Haram. “That’s what motivated me to join the C.T.J.F.” Three years ago, the group killed a close friend of hers, a man who was like a father to her. So, even before the C.J.T.F. started up, in 2013, she began working as a community informant, passing on intelligence about neighbors whom she suspected to be Boko Haram members to the military. When she learned of the formation of the C.J.T.F., she was impressed with their initiative and decided to sign up. Muhammed was twenty-four at the time. Her duties are few—frisking women coming into crowded public events, like religious festivals, and apprehending female suspects in their homes—but dangerous. She doesn’t carry any weapons. Muhammed was scared when she first started, Kalli said, but now she told me with a dismissive bravado, “I’m not afraid at all.”

The C.J.T.F. was a “reaction to both the activities of the insurgents and the military,” Kaka Shehu Lawan, the justice commissioner of Borno State, of which Maiduguri is the capital, told me. In the past, after an attack, “once the military comes, they will not spare or investigate anybody, they will start shooting and molesting the innocent passersby. The C.J.T.F. felt they—and their fathers—were being punished for crimes they had not committed.” He argued that the group was in the best position to root out Boko Haram. “These miscreants are living among us,” he said. “The youth know them.” When officials with the Borno State government learned about the civilian fighters, in 2013, they invited the C.J.T.F. leadership to a meeting of their security council, headed by the governor. C.J.T.F. leaders were asked about their mission and practices—“in order to avoid breeding another militia,” Shehu Lawan said—and they responded that they only wanted to apprehend terrorists and hand them over to the military. Faced with a worsening crisis, the security council was satisfied with that explanation and recognized the group as a “voluntary organization.”

The government gave the vigilantes vehicles, uniforms, and stipends on the condition that they participated in a training program run by the Army. But this year, the Army had to halt the program in order to convert the training site into a refugee camp, after training only about twenty-eight hundred of the more than ten thousand C.J.T.F. fighters. I asked Shehu Lawan if the vigilantes’ documented human-rights abuses—which include arbitrary arrests, torture, and extrajudicial killings—were still a problem. He told me that the reports of abuses weren’t true, that they were just “propaganda.” Shehu Lawan admitted that his office had received complaints from people who said the vigilantes had violated their rights, but said this wasn’t a systematic problem. “They use sticks, they are more or less civilians,” he went on, either oblivious or indifferent to the fact that many of the vigilantes carry cheap, locally made guns.

Out of the some sixty suspects whom the C.J.T.F. has apprehended from Muhammed’s neighborhood, near the local oil company depot, over the past two years, several of them were women. (“Of course women are part of Boko Haram,” Kalli said.) When I entered the neighborhood recently, residents had tied barricades of bright rope across several of the narrow, sandy streets to prevent suicide bombers from getting too close to the local mosque. After they checked your car they would lower the rope and let you pass. Kalli and his men, like most Maiduguri residents, are Muslim, and under the precepts of Islam cannot enter the homes of women they do not know. So they send Muhammed in to confront alleged female terrorists who have been brought to their attention through tips from other vigilantes or residents. She surveys the house before approaching, then enters what is most often an open compound occupied by an extended family, without a weapon, carrying a description of the woman she is arresting. “We came for you, you have to follow me,” Muhammed tells the woman, insisting even when the suspect denies having any affiliation with the Islamists. Eventually, most of the women cover themselves and agree to leave.

It’s harder to do this work as a woman, Muhammed admits; she feels more vulnerable if something were to go wrong. Her family in her home village of Gamboru Ngala, ninety miles outside Maiduguri, wants her to stop. “But I have no option,” she said. Boko Haram is now in a weaker position than when the C.J.T.F. was formed.

Last winter, the Nigerian Army, with considerable aid from Chadian troops, reclaimed most of the towns and villages that had been seized by Boko Haram, and this year the Army rescued hundreds of women and children that Boko Haram had held hostage. Now, under President Buhari, soldiers appear to be better armed and more willing to raid Boko Haram camps than ever before, according to the vigilantes.

I asked Shehu Lawan what would happen to the vigilantes should they not be needed anymore. He spoke of training them to become farmers, firefighters, and vehicle inspection officers, and integrating them into the armed forces and state security agency. But not long ago, Borno State Governor Kashim Shettima was widely quoted as saying that he feared the vigilantes, many of whom are unemployed, could turn into a “monster.” When I asked Shettima about that comment, he said that more context was needed: “Unless deliberate efforts are made towards addressing issues of unemployment, illiteracy, hunger and extreme poverty,” he told me, “the C.J.T.F. will be the Frankenstein monsters that might end up consuming us.”