You are here: Home / MidEastGulf / The United States and Russia are close to a deal on air security in the skies over Syria 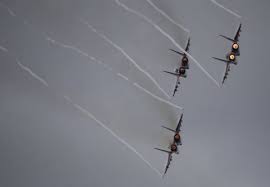 “The rapprochment of positions on key elements of the future document has been recognised”, reads a report of the Russian Ministry of Defense at the end of the third round of videoconference talks. “The succession of the next steps by the parties – states the note – has been agreed. The discussion was held, as the preceding ones, in a professional manner and in a constructive atmosphere”.

The US Pentagon, quoted by the BBC, confirmed “progress” in the talks with Russia on security in Syrian skies.

“The parties are finalising the text of the agreement” writes the British broadcasting company, quoting US sources.

The two powers are therefore aiming to prevent accidental attacks between the two air-forces: a possibility Russians and Americans fear after the red flag jets and the stars and stripes ones made “visual contact” 15-30 kilometers away; episodes which have been characterised as dangerous.

Last Saturday – said the spokesperson for the Us armed forces, Steve Warren – two American planes and two Russian ones “entered the same battle zone”. The Russian ministry of Defense admitted that Saturday a Russian jet Su-30 Sm got close to an American one at a distance of 2-3 kilometers, but assured it had done so not “to scare anybody” but to identify the other plane which had been signalled to the pilot by his flight instruments and anyway, stressed the Russians “this was not the first episode of this kind”. Better to clarify things then also after recent vioations of the Turkish air-space by Russia denounced both by NATO and Ankara.

Tensions between Moscow and Washington have not abated.

On September 30, Putin sent fighter jets to Syria to hit Isis and other terrorist groups but the West is accusing the Kremlin of intervening militarily to lend a hand to Assad and of targeting the Syrian opposition supported by the US, also killing civilians.

To complicate matters, Washington has said no to a Russian proposal to hold a summit in Moscow on the Syrian situation and also refused to receive “in Washington a high delegation headed by Russian Premier Dmitri Medvedev”, thundered Foreign Minister Sergei Lavrov. Lavrov also lambasted the US refusal to support a Security Council resolution to denounce as a terrorist attack yesterday’s attack against the Russian embassy in Damascus where two mortars fell inside the Russian diplomatic representation while hundreds of Assad supporters demonstrated in favour of Moscow’s raids.