You are here: Home / MidEastGulf / The U.S. will cooperate with Russia in Syria “under conditions” 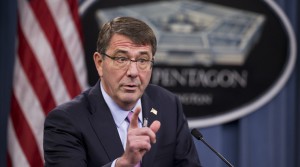 The U.S. will cooperate with Russia in Syria if Moscow agrees to work on a political solution in the war-torn country and simultaneously fight against Daesh, Defense Secretary Ash Carter said.

“The U.S. and Russia share two interests [in Syria]; the lasting defeat of ISIL and a political transition from the [Bashar] Assad regime that preserves and begins to restore the country,” Carter told reporters while recalling his telephone call with his Russian counterpart.

“We believe the political and military tracks need to proceed in parallel and we’re willing to work with Russia on that basis,” he added.

During his talk with Sergey Shoygu, Carter expressed that Russia’s support for the Assad regime would be counterproductive to ending the overall violence in Syria.

On the other hand, the Russian foreign ministry emphasized that Moscow is deploying arms in Syria to launch its independent campaign against Daesh.

“To pursue the defeat of ISIL without, at the same time, pursuing a political transition, is to fuel the very kind of extremism that underlies ISIL, and if that’s the Russian view, that’s a logical contradiction,” Carter noted.

Carter’s remarks came during a joint press briefing at the Pentagon with Ukrainian Defense Minister Col.-Gen. Stepan Poltorak who said Russia’s move in Syria is a tactic to divert international attention from Moscow’s support for separatists in Ukraine.

Carter underscored that American and Russian interests may overlap in Syria but he said discussions about Syria would not change the U.S.’s posture against Russian support to separatists and its “destabilizing actions” in Eastern Europe.

The American defense chief said the U.S. has provided more than $244 million in equipment and training to Ukraine, and that by the end of November 900 Ukrainian National Guard forces would graduate from a training program.

The U.S. would start training Ukrainian regular armed forces thereafter, but Carter gave no details about that program.