You are here: Home / MidEastGulf / The U.S. deploys to Syria 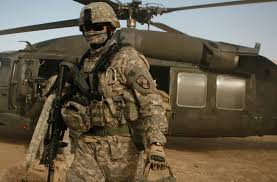 The autumn of escalation in Syria continues apace with the U.S. decision to deploy up to 50 Special Operations Forces (SOF) in northern Syria to advise and assist units—primarily Kurdish, but to include Arab forces as well—fighting the so-called Islamic State to the north and east of Raqqa. While the U.S. has previously conducted SOF raids into Syria, this will be the first deployed presence by U.S. troops in Syria since the war began in 2011, and it comes on the heels of Russian and Iranian military escalation further to the west.

Even though Syria is now host to multiple foreign interventions, there is little chance of U.S. combat advisors coming into contact with their Russian or Iranian counterparts, or even Russian airstrikes. The U.S. is continuing to pursue an anti-Islamic State focus while Moscow and Tehran are engaged in supporting the Assad regime in a spiraling civil war. Still, the deployment of these combat advisors is fraught with risk, as nothing in this conflict is straightforward. The war in Syria has devoured many a military strategy, and it remains to be seen how limited the scope and mission of the U.S. embed program will stay once it begins.

In the U.S. military, the term ‘Special Operations Forces’ is distinct from the term ‘Special Forces’ (SF): SF are the Army’s elite Green Berets; SOF includes SF but also groups such as the Navy SEALs, the Army Rangers, and elements from the Air Force and Marines as well. The U.S. has not specified which unit or force will be embedded, but it could likely be members of the 5th Special Forces Group, due to its earlier involvement in the training and advising of Syrian rebel groups. The stated mission of the program is to embed no more than 50 personnel in the various Syrian rebel units pressuring the Islamic State from northern Syria. U.S. SOF personnel are among the best at serving as a force multiplier and enhancer. The rebel units, already functioning well, will likely improve with the full-time presence of U.S. SOF advisors. Whether this improvement is enough to defeat the Islamic State in a place such as Raqqa is an open question. For the first time, however, the answer to that question includes U.S. combat forces in Syria.

While the U.S. will strive to limit the scope of the embed program and will continue to avoid pivoting to the broader anti-Assad focus favored by the rebels and regional allies, the program itself could create unforeseen ripples in an enormously complex and shifting conflict. For starters, the U.S. will likely embed some of its personnel with Kurdish groups that have been bombed by Turkey, a NATO member and U.S. ally. Turkey deeply fears a semiautonomous Kurdish region along its southern border—just as deeply as the Kurdish groups fighting in Syria desire it. Convincing Turkey that U.S. support is aimed entirely at dismantling the Islamic State without enabling a proto-Kurdish state has been a challenge for Washington, and will become much more difficult given this latest shift in policy.

There is also the fear that other rebel groups will resent or reject such direct U.S. support for Kurdish groups fighting the Islamic State—the preferred enemy of the U.S.—with less generous support for the rebel groups fighting the Assad regime. The previous U.S. effort to ‘train and equip’ Syrian rebels was an unmitigated disaster and ultimately scrapped, as the U.S.-trained rebels were targeted and portrayed by other rebel groups as lackeys for the West.

While Washington is downplaying the significance of the decision, it is a momentous shift towards a more direct role in Syria—the avoidance of which has been one of the few consistent and understandable strategies since the war began. The 50 SOF personnel will require hundreds more in support, logistics, and a quick reaction force (QRF), along with combat search and rescue (CSAR) located in Turkey and A-10 and F-15 close air support. Inserting even a small number of military personnel into a shifting and irregular war is no small matter. As seen in Afghanistan and Iraq, the best efforts at a quick fix rarely survive the immensity of the challenge and the near-impossibility of an actual solution.