You are here: Home / Senza categoria / The tragedy of the sex slaves of the Islamic State

Some Yezidi women, abducted and used by ISIS soldiers, have escaped, but thousands are still captives… 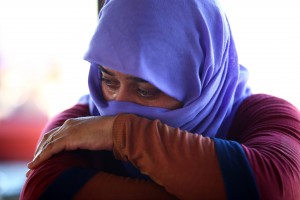 “They were seven, first an Egyptian, a Moroccan, then a Palestinian …” Haifa, a young Iraqi woman, counts on her fingers the number and nationality of the fighters of the Islamic state who during her two years of captivity, bought and sold her as a sex slave.

Haifa, 36, and her family are among the thousands of members of the Yezidi minority who were especially persecuted by the extremists when they took control of numerous territories in Iraq and Syria. This minority, which speaks the Kurdish language, professes a pre-Islamic religion, and ISIS considers them heretics and polytheists, making Yezidis their main target of extremist sites. The UN has denounced the “ongoing” genocide against the Yezidis.

“There was a kind of market: they took off the Yezidi women, then the Daech (ISIS) soldiers made their choice. One day, one of them bought 21 women,” reports the woman, who concealed her true identity under the pseudonym Haifa. She was captured in her native region of Sinjar and taken to Mosul, the Iraqi stronghold of the Islamic state, and then moved to Raqqa, the group’s stronghold in Syria. “They treated us like cattle, causing us to endure horrors,” he says. Thousands of women are still being held captive. After two vain attempts to escape, Haifa regained her freedom a few days ago thanks to the one she defines – very politely – as her “benefactor.” Some Yezidi women managed to escape the Islamic state, others were “bought” to be released without the group’s knowledge.

In October, the Iraqi offensive to resume Mosul revived hopes of further releases. It is estimated that there are still three thousand men, women and children in the hands of Islamic fundamentalists, said Hussein al-Qaidi, who runs an aid office for the captive people in Dohuk, funded by the Iraqi Kurdish authorities.

Haifa always tries to overcome the nightmare she has endured for two years. Exhausted and sick, she is ashamed to tell her family what she has had to face. She fears for her 20-year-old sister who, like many other women, is still in the clutches of the Islamic state. And Haifa, speaking recently to a reporter, implores: “I ask the whole world to help free them. ”