You are here: Home / MidEastGulf / The terrifying masked Iraqi death squads taking back Mosul from the ISIS jihadis 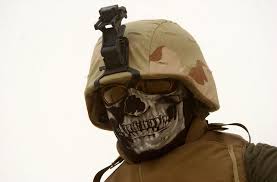 Elite special forces are terrifying ISIS soldiers in Iraq by wearing skull masks as they fight to take back Mosul.

The Golden Division is a US-trained group of special forces soldiers fighting on the front line as the operation to take back the ISIS controlled city continues.

According to the Sun, they took back six districts in Mosul, ISIS’s largest stronghold, on Saturday morning, breaking through the militant defence lines and fighting them in the streets.

The elite fighters are part of Iraq’s 1st Commando Battalion and have the same training as a US Army Ranger.

Commanders of the brigade have boasted that each of the soldiers is worth 1,000 ISIS fighters.

The group is said to have two million followers on Facebook and have become local heroes.

Last night, an Irish jihadi nicknamed Terry Taliban, killed himself in Mosul in a suicide attack as the forces make steps to reclaim the ISIS stronghold.

Fighting continued in the morning, with both sides firing mortars and automatic weapons on each other’s positions, while the Iraqi troops also responded with artillery. Clashes were most intense in the al-Bakr neighborhood. Sniper duels played out from rooftops in the mostly residential areas, where the majority of buildings are two stories high.

Maj. Gen. Sami al-Aridi of the Iraqi special forces said: ‘Daesh [ISIS] is in the city center and we must be very careful as our forces advance,’

With more densely packed neighborhoods ahead, his forces will be challenged to avoid both higher military and civilian casualties.

The special forces launched a two-pronged assault deeper into Mosul’s urban centre on Friday, unleashing the most intense street battles against IS militants since the offensive to retake the city began nearly three weeks ago. At least seven special forces troops have been killed in the fighting.

More than 3,000 Iraqi troops took part in the assault under heavy U.S.-led coalition air support, but the pace of the fight also slowed as Iraqi forces moved from fighting in more rural areas with few civilians to the tight, narrow streets of Mosul proper. At least seven suicide attackers in explosives-laden vehicles attacked troops on Friday, five of whom were killed before nearing their targets.