You are here: Home / Senza categoria / The Syrian American Forum (SAF) organizes demonstration in Boston to express solidarity with Syria 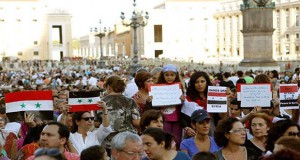 The Syrian American Forum (SAF) in Boston organized Sunday a demonstration where Syrian community in Boston took part and expressed solidarity with their homeland, Syria.

The participants in the demonstration called on the US to stop supporting terrorists in Syria.

“We want to tell the Syrians that we love them and want to reveal what is happening in Syria for the Americans,” a girl that participated in the demonstration said.

“From Boston, the place in which poet Jubran Khalil Jubran conveyed the first Syrian messages to the world, we came to the same place to say that terrorism is bad for everyone,” Chairman of SAF, Ghiath Moussa, said in a statement reported by al-Mayadeen channel.