You are here: Home / Analysis / “The Sword of Revenge”: who is Al Qaeda’s new leader? 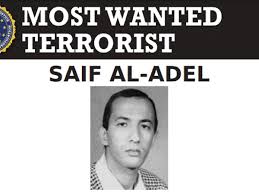 Al Qaeda has a new leader, called ‘the Sword of Revenge’ who is reportedly set to make the terror group as dangerous as they were under Osama Bin Laden, like reported by albawaba.com.

Egyptian former general Saif al-Adel is in hiding in Iran and the ‘brilliant and ruthless strategist’ has now taken the reins from Ayman Zawahiri, according to reports.

The former leader was rumoured to be dead late last year, following speculation he had succumbed to asthma following ‘breathing issues’.

Now Saif, who has long been tracked by intelligence agencies both in the UK and the US, has taken the top job, and is preparing a ‘rebrand’.

A senior British terrorism expert told the Mirror: ‘Compared to Zawahiri he is likely to be a much more effective leader, at least so or more so even than bin Laden.’

Saif has been heavily involved in Al Qaeda activities for some 30 years, and already has a £7.5 million US bounty on his head, after the US embassy bombings in Nairobi and Dar es Salaam in 1998, which left 224 dead.

The veteran fighter was a leading member of bin Laden’s close protection unit in Afghanistan, named ‘Black Guard’ after the colour of their scarves.

A source described Saif as someone who was always ‘the least affected by the deaths of innocent civilians.’

Reports suggest the dangerous new leader is looking to build ties with ISIS, Iran and the Afghanistan Taliban.

Colonel Richard Kemp, who once monitored Saif for the British Government nearly 20 years ago told the Mirror: ‘There is co-operation between groups like this but Saif is so well-respected that he could cause even greater co-operation or even a merger.

‘He could make Al Qaeda a much more effective organisation than it has been for a few years.’

Last heard from in a message on the anniversary of 9/11, former leader Zawahiri’s health and longevity have long been in doubt, although reports of his death have proved incorrect in the past.

The Egyptian-born doctor was second-in-command to bin Laden and took over the terrorist network after the Saudi’s death in 2011, but its influence has waned and Al Qaeda is now widely seen as a shadow of its former self.

One of the sources who spoke to Arab News was an Al Qaeda translator said to maintain close ties with the group, who said Zawahiri had died in Afghanistan.

‘He died of asthma because he had no formal treatment,’ the translator told the outlet’s Pakistani edition.

Reports at the time suggested Zawahiri’s death would deal a further blow to the group after it emerged that Israeli operatives had secretly killed its deputy leader on a US-ordered mission in Iran.

Abdullah Ahmad Abdullah, also known as Abu Muhammad al-Masri, was shot and killed in Tehran by an Israeli hit squad on a motorcycle.

The operation is said to have taken place on August 7 on the anniversary of the 1998 US embassy bombings.

The killing of bin Laden in a US operation in Pakistan in 2011 left the group in the hands of Zawahiri, an Egyptian veteran of jihad and the key Al Qaeda ideologue, but without Bin Laden’s ability to rally radicals around the world.

The US government said last year that bin Laden’s son Hamza was also dead, removing a man seen as a possible heir to the Al Qaeda leadership.

The group has spawned several franchises across the world that bear its name, including in Africa’s Sahel region, in Pakistan as well as in Somalia, Egypt and Yemen.

But it does not control their actions or the alliances that they may forge on a local level.