You are here: Home / MidEastGulf / The stealthy Hezbollahzation of Iraq 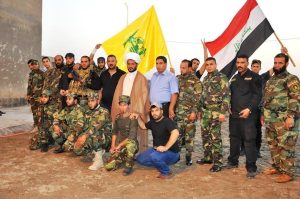 Experts disagree about the date when Hezbollah came into being. It emerged out of the shadows, and suddenly in 1983 was responsible for bombings that killed hundreds of peacekeeping forces in Beirut.
We Lebanese were similarly bemused by this entity that gained a stranglehold on our society. As the civil war ended, instead of demobilizing like other militias, Hezbollah expanded its activities, running schools, hospitals, universities — all the institutions of a fully-formed state. Considering how fragile the Lebanese state and army were, for many communities Hezbollah was the state, bankrolled by hundreds of millions of dollars of Iranian funds, like reported by arabnews.com.

In our naivety, I and other Lebanese supported Hezbollah’s endeavors to push Israel out of Lebanon. We believed their platitudes about putting Lebanese interests first — until it was far too late. Hezbollah’s narrative of muqawamah (resistance) after decades of Lebanon’s weakness and divisions even gave us a bizarre sense of national pride. How wrong we were!

This scenario is repeating itself today in Iraq. The Al-Hashd Al-Shaabi umbrella movement of mostly Shiite paramilitaries has no intention of demobilizing after Daesh is defeated. Instead, it is comprehensively expanding its remit. Turkey’s President Recep Tayyip Erdogan recently described Al-Hashd as a “terrorist organization” and facilitator of “Iran’s Persian expansion policy.”

In universities, Al-Hashd sponsors activities, enlists students and holds military training camps. Institutions have been established in Sunni provinces for recruitment, indoctrination and expansion. Tens of Al-Hashd offices have reportedly been opened in Mosul before this Sunni-majority city has even been liberated. Intelligence headquarters have been set up, and Al-Hashd detention centers — where torture and killings are routine — are no secret.

Shiite religious institutions complain of being besieged by Tehran’s propaganda. Pro-Iran seminaries are awash with funds as thousands of young people are indoctrinated with Tehran-approved theology. There are sustained efforts to ensure that a pro-Iran cleric succeeds Iraqi Ayatollah Ali Al-Sistani.
The Hashd Law failed to bring paramilitaries under the government’s command. Instead, this law makes them a permanent legal entity, receiving money and weapons openly from the state and clandestinely from Iran, thus further undermining the regular army. Prime Minister Haider Al-Abadi says the right things to the West about demobilizing Al-Hashd, but he has just promised to increase expenditure on these militias.

We can only speculate how much cash was handed over in huge bags to Al-Hashd faction the Hezbollah Brigades last week to secure the freedom of 26 members of Qatar’s royal family, who were kidnapped by the group in late 2015 while hunting in central Iraq.
The fact that part of the Tehran-brokered deal involves population swaps in Syria, giving contiguous areas of Shiite-dominated territory near Lebanon’s border, illustrates the regional remit of these Al-Hashd entities.

Efforts are afoot to unite Shiite factions into an Al-Hashd list ahead of Iraqi elections, aspiring to become the largest bloc in the next Parliament, nominate the prime minister and monopolize lucrative and powerful departments. Former Prime Minister Nouri Al-Maliki has unashamedly embraced Al-Hashd as his route back to power.
Hezbollah had been Iran’s greatest achievement in exporting its revolution. Tehran is replicating this model in Iraq, Syria and Yemen, establishing proxy states-within-states whose tentacles reach into all domains of society. The Trump administration has vowed to prevent the Hezbollahzation of Yemen. This will require colossal efforts, yet the problem is exponentially more complicated in Iraq.

At a recent press conference, when Donald Trump was asked about Iranian proxies in Syria and Iraq, he did not know what the reporter was talking about. Can we hope for a considered Western response to Al-Hashd when the US president does not even know what it is?
While the world has been obsessing over North Korea and Syria, Al-Hashd has stayed out of the headlines. A Hashd University does not make for such sexy headlines as missile tests and chemical bombs, but the confrontational aspirations were glaringly transparent in a recent speech by Al-Hashd leader Qais Al-Khazali.

“There will be a strong and effective Hashd University, through which we could address our enemies and tell them, ‘If you fear us now, you must know that Al-Hashd Al-Shaabi is present in every university, college and department,’” he said.
Sectarian governance and war crimes by paramilitaries will drive Iraq toward renewed conflict. This year is perhaps Iraq’s last chance to be a unified entity. A sectarian and brutal regime will drive communities back into the arms of extremists and anti-state groups.

The Hezbollahzation of Iraq, Syria, Lebanon and Yemen is proceeding at a terrifying rate, offering the prospect of a pro-Iran super-state — a Persian Empire — reaching the Mediterranean.
It is not enough for the US to warn that Iran has been “put on notice.” Right now in multiple countries, at all levels of society, thousands of institutions and entities are being transformed into bodies with a single purpose: To do Tehran’s bidding. If only we could hope that the response would be as sophisticated and strategic as Iran’s Machiavellian efforts toward regional hegemony.
The Lebanese and the rest of the world complacently failed to perceive the threat Hezbollah posed until it was too late. Will we make the same mistake again?