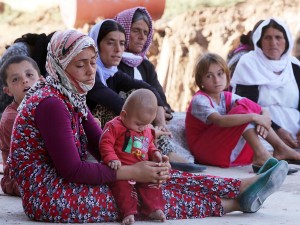 A secret underground network operating in Iraq and Syria has reportedly freed more than 3,000 Yazidi women held captive in sexual slavery by Isis, like reported by independent.co.uk .

Kurdish and Christian civilians make up the group, along with other ethnic minorities and families of the victims, NGO Yazda has claimed.

According to the charity, rescues are carried out through word of mouth, driven by Yazidis who have escaped capture or whose loved ones are still being held in Isis territory.

“This is a group made up of all ethnicities working together on the ground. I know of more than five different groups collaborating, some are rescuing from Mosul, some from Raqqa, every group is working in different places,” Yazda director Ahmed Burjus told The Independent.

“If one person hears of a girl who is trapped in Raqqa, then they will call a friend on the ground who might know someone who will be able to try and rescue them, these are local people trying to free these women.”

Mr Burjus said little is known about the civilian humanitarian effort to free captive Yazidis due to the dangerous nature of the group’s work.

“These rescue missions happen very secretly, no information is shared with anyone. These are local people, local Yazidi families who carry out the rescues so they remain in danger. They can’t post anything about their whereabouts or their plans for fear of Isis capture,” he said.

The Yazidi people are an ethnic minority whose ancient religion is considered a form of devil worship by Isis. According to the UN, more than 3,500 are still being held captive, however Mr Burjus fears the real number could be even higher.

“Entire families have been killed or kidnapped. People didn’t know the correct information about them at the start, so everything is an estimation,” he said.

In July 2016, the UN recognised Isis’s persecution of the Yazidis as “genocide”. ​

Staff told Human Rights Watch: “Officers provided no reason, no paperwork and no information on how long it was being closed. The officers put locks on the doors to prevent staff from coming back.”

The KRG allegedly accused the group of being illegally involved in “political activities”, a claim Yazda describes as “baseless”.