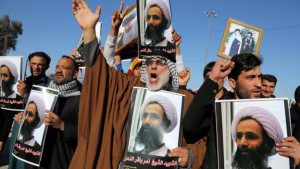 The deepening crisis in relations between Iran and Saudi Arabia is a reflection of a deeply fractured Middle East in which the US wields significantly less influence than in the past.

Uncertainty about Washington’s role has emboldened both Tehran and Riyadh to pursue more assertive regional policies. But assertiveness is not the same as exercising good judgement and the heightened hostility between Iran and Saudi Arabia threatens to widen many of the Middle East’s existing fault lines.

It was the Saudi decision to execute the prominent Shia dissident Sheikh Nimr al-Nimr on Saturday that precipitated this current crisis, underscoring a belief that the Saudi regime is intent on rejecting any conciliatory policy towards Tehran.

The Saudis see Iran as a growing regional threat, committed to stirring up Shia populations in the Gulf states and elsewhere, and to exporting its brand of “revolutionary” Islam.

The Saudis – a little like the Israeli right – regard almost every problem in the region as emanating from Tehran.

For the Iranians, the Saudis are perceived as clamping down on dissident Shia elements both at home and elsewhere in the Gulf, seeking to overthrow Iran’s ally in Syria, President Bashar al-Assad, and more generally seeking to deny what they see as Iran’s rightful role as a regional power.

At the third point in this triangle is Washington. President Barack Obama is eager above all to maintain regional stability insofar as it exists at all.

His administration is struggling to influence the Saudis while treading cautiously in its dealings with Iran, for fear of prejudicing the nuclear agreement now entering the initial and delicate implementation phase.

Of course Washington’s behaviour influences the other two protagonists, but not in ways that it would like.

The Saudis’ current regional paranoia – although Riyadh may arguably have genuine concerns – is to a large extent stoked by the track of US foreign policy over recent years.

It’s a tale which begins with the US-led invasion of Iraq and the overthrow of Saddam Hussein, a step many in the Gulf see as “handing” Iraq to Iran on a plate.

Washington’s willingness to abandon President Hosni Mubarak of Egypt in the wake of the Arab Spring compounded concerns in Riyadh that the US might be an undependable ally.

The nuclear deal with Iran and the potential for a rapprochement between Washington and Tehran has only made matters worse.

The chances of such a rapprochement – the stuff of Saudi nightmares – are almost certainly grossly exaggerated.

The nuclear deal is still in its infancy and beset by criticism from hardliners in both the US and Iran. The same dissonant voices are likely to ensure that prospects for any broader regional understanding between Iran and the US remain an aspiration rather than a reality.

But just how far might Iran be emboldened by the strains between Washington and Riyadh?

The Obama administration’s inability to present a clear policy in the region, or to set out its vital interests – not easy, certainly, amidst all the turmoil – leaves room for misunderstanding by regional players.

This is especially problematic given the US relationship with Saudi Arabia.

Given Riyadh’s human rights record and its export of an austere version of Islam that has often blended into support for Sunni extremism, the Saudis are not so much “allies” of Washington as “partners”, veteran US diplomat Dennis Ross notes (allies, he adds, “share values and not just interests”.)

Achieving this amid the wider chaos in the region with so many factors out of Washington’s control will not be easy. Indeed it may be even more difficult in a US presidential election year when rhetoric outweighs reason.

In his last year in office, Mr Obama and his diplomatic team look set to have their hands full.