You are here: Home / Europe / THE SAS are ready to dispatch a sniper gunship to kill Islamic State terrorists in Iraq and Syria 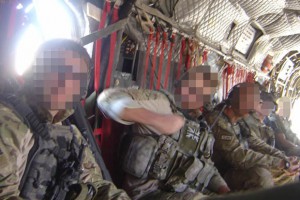 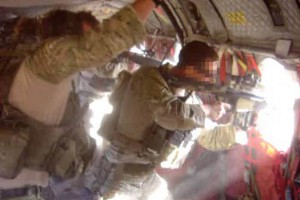 The battle-proven aircraft is a specially converted RAF Chinook helicopter equipped with sniper firing positions and a multi-barrel mini-gun.

The SAS has been fighting in Iraq and Syria for the past year but top brass now want the elite force to carry out more raids against Islamic State thugs.

Chancellor George Osborne said yesterday that the current Syrian refugee crisis must be dealt with “at source”, his comments coming as senior Tories demand RAF air strikes against IS in Syria.

The sniper gunship is one of the most deadly weapons in the SAS arsenal. Snipers inside the aircraft can engage multiple ground targets using highly accurate rifles.

Exclusive pictures and a video obtained by the Daily Star Sunday show the chopper in action in Afghanistan in 2013.

It was designed to provide airborne fire support for covert operations against insurgents.

The tactic proved hugely successful and the Chinook was dubbed “death from above” by members of the special forces.

In the background the noise of a mini-gun can also be heard. It can rain down fi re at a rate of 4,000 rounds per minute.

The faces of the soldiers have been disguised but it is clear from their smiles the mission was a success.

One military source said: “The Taliban grew used to seeing Chinooks flying over the areas they controlled.

“But they were caught by surprise every time the gunship opened fire.

“The Chinook was used as a work-horse in Afghanistan. It carried troops and equipment between forward operating bases and Camp Bastion.

“The Taliban became so used to seeing Chinooks flying above them that in many cases they didn’t even bother to hide.

“The SAS were aware of this and decided to exploit the Taliban’s casual attitude with devastating effect.”

The sniper gunship was partly developed to target insurgents in urban and residential areas.

Using highly accurate and powerful sniper rifles, the SAS found they could “take down” terrorists without endangering innocent civilians.

The weapons are loaded with huge armour-piercing .50 calibre rounds which can penetrate buildings and lightly armoured vehicles, meaning the terrorists can run but they can’t hide.

The Chinook is flown by pilots and crew from the RAF’s elite 7 Squadron who work exclusively with the special forces.

These pilots are trained to fly in all weather conditions and use night vision goggles in the dark.

Now the SAS wants to use the Chinook gunship in Iraq and Syria, where they have been fighting Islamic State terrorists for almost a year.

Last week it emerged that an SAS unit had been credited with killing Fadhil Ahmad al-Hayali, second-in-command of Isis.

And we revealed recently how an SAS sniper saved the lives of a father and son after shooting dead a terrorist who was about to execute them.

Although British and US special forces have killed several high-ranking terrorists, the Jihadis still control large areas of Iraq and Syria.

One defence source said: “The SAS developed the tactic of deploying snipers in a Chinook in Afghanistan and it proved to be very successful.

“The results were pretty sensational and had a major impact on the Taliban in Helmand.

“The sniper rifles used webbing supports so that they were not affected by the Chinook’s vibrations, which enabled the snipers to shoot with great accuracy.”