You are here: Home / MidEastGulf / The Russo-Iranian plan to undermine Saudi Arabia in Syria 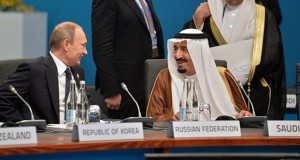 Whether through war or diplomacy, Russia and Iran have been trying to finish off Ahrar al-Sham, a Saudi-sponsored Syrian rebel group that has shown resolve and resilience in fighting forces loyal to Bashar al-Assad. The group has threatened Assad’s survival and has so far proven to be an obstacle in the face of the Russo-Iranian military campaign aimed at reviving the Syrian dictatorship.

Since the outbreak of the Syrian war, Washington has placed two armed groups on its list of Foreign Terrorist Organizations: ISIS and the Al-Qaeda affiliate Jabhat al-Nusra. As with its foreign policy in general, Washington’s position on Ahrar has been murky. By calling on Washington to spell out its position on Ahrar, Moscow and Tehran hope to build international consensus that the group is terrorist and should be defeated, as a prerequisite for a political solution in Syria.

Russia and Iran have consistently tried to connect Syrian rebels to terrorism, believing such a designation gives Assad a green light to eliminate them brutally. Russia, Iran and Assad believe that painting groups as terrorist might also make them toxic to their foreign sponsors.

Iran has also cited foreign sponsorship as proof of terrorism in Syrian rebel groups. Because Turkey’s government is Islamist, and because Qatar leans toward Islamists across the region, Iran has found it easy to shout Islamism, and therefore terrorism, against any Syrian opposition group with ties to either Turkey or Qatar.

Saudi Arabia has been a harder nut to crack. Riyadh has been at the forefront of combating terrorism in the region since at least 9/11. Unlike Turks and Qataris, who sided with the Islamists in Egypt, Saudi Arabia opposed Cairo’s Islamist government. As an alternative, Iranian propaganda tried to connect ‘radical Saudi Muslim teachings’ and ISIS.

But Iranian propaganda has failed. ISIS is an Iraqi organization whose leaders have inherited Saddam’s hatred of Saudi Arabia. And like Al-Qaeda, ISIS has launched attacks inside the kingdom.

Russia, for its part, arranged for Assad’s security chief, Ali Mamlouk, to visit Saudi Arabia on the premise that if Riyadh wanted to undermine Iranian influence in Syria, Mamlouk could offer such guarantees. Instead of extending such an offer, Mamlouk tried to spin the story of his Saudi meetings in the media in a bid to undermine confidence between Syrian rebel groups and Saudi Arabia.

When Russia and Iran saw it was impossible to outmaneuver the Saudis on Ahrar, Russia launched a direct military assault against the group, while Iranian propaganda went after the Saudi royal family, judging by speeches of Hezbollah’s Secretary General Hassan Nasrallah and the “Death to Al Saud” chants of his supporters.

But Ahrar surprised Russia with its military performance. Meanwhile, the Saudis responded to the Vienna effort of designating Ahrar terrorist by doubling down on their military support of the Syrian group. The solution in Syria, implied Saudi Foreign Minister Adel Al-Jubeir, would not be a political settlement. “Assad will leave, whether through politics or military action,” he told reporters.

Saudi’s holding onto Syrian non-Islamist rebels like Ahrar prompted Iranians to threaten to withdraw from the Vienna meetings. Statements from unidentified senior Iranian officials in the Wall Street Journal threatened an Iranian boycott of Vienna and were especially offensive toward Saudi Arabia, echoing Nasrallah’s tone.

Russia and Iran want to help Assad beat his opponents, terrorist or not. Saudi Arabia has skillfully identified and sponsored moderate Syrian rebels who threaten Assad’s survival. Aside from Iraqi ISIS, which controls Syrian territory mostly east of the Euphrates, the war in Syria is between Assad and Ahrar. Russia and Iran are trying to enlist the US, via Vienna, to vilify Ahrar as a move towards destroying it, undermining Saudi influence in Syria and finishing off the moderate Syrian opposition.

Saudis and Americans are aware of the Russo-Iranian plan. President Obama, however, would not mind seeing Assad prevail, were it not for the Saudis, who have used their weight to neutralize America on Syria, a step that has proven adequate given Washington’s endlessly amateurish foreign policy.