You are here: Home / MidEastGulf / The Russian-Iranian-Syrian mutual defense treaty the Western media forgot about 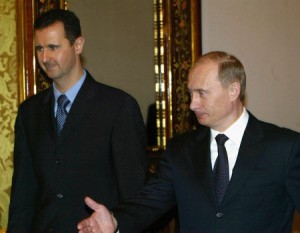 As every armchair historian knows, in 1914 a set of second and third rate nations drew the globe’s superpowers into the First World War. Closer to present day, Western Asia is a similar tangle of treaties and mutual defense pacts in which a single amateurish diplomatic decision or military misstep could conceivably result in a much, much wider war.

Reported by the Associated Press reporter Sarah El-Deeb on Sept. 13, 2015 (via KBMT-TV of Beaumont, Texas), the Russian airbase in the coastal town of Jableh isn’t just under control of the boys from Mother Russia, they’re also expanding it. As things turn out, the small contingency of Russian Naval Infantry (Marines) may soon earn their pay. As El-Deeb notes, the base has already come under artillery and mortar fire from Islamic jihadist forces to the immediate east.

Also reported by Johnlee Varghese of the International Business Times (India edition) on Sept. 11, 2015, a mixed force of approximately 1,000 Iranian Marines and members of the Iranian Revolutionary Guards Corps are within a figurative stone’s throw from the roughly 100 Russian Naval Infantry (Marines) who recently touched down in the war-torn nation. As Varghese reported, the Iranian are to join forces with the Russians in combat operations with Assad’s Syrian National Army against the numerous Islamic jihad groups occupying huge swaths of the nation.

Russian forces will reportedly be deploying advanced S-300 air defense missile systems at the Jablah base. Follow-on troops from the Russian Marine Brigades 810 and 336 will also be assigned to the Jableh airbase. And much like 1914 Europe, the slew of mutual defense pacts between the region’s nations could spiral out of control rather quickly.

As noted on the official website of the University of Washington’s Jackson School of International Studies (Jenkins, 17), the Russian Federation maintains mutual defense treaties with both Syria and Iran. As Russia has stated on more than one occasion that “Iran is our close neighbor, just south of the Caucasus. Should anything happen to Iran, should Iran get drawn into any political or military hardships, this will be a direct threat to our national security.”

In the meantime, reporter John Xenakis of the Breitbart.com news portal also cited earlier this summer of the 2006 mutual defense treaty between Syria and Iran. Ironically, it’s Assad who doesn’t want Iranian troops on Syrian soil. He realizes that once the Iranian tick is dug into the Syrian hide, he’ll eventually be little more than an Iranian vassal. But with him controlling only roughly one third of the Syrian nation, he doesn’t have much of a choice. Especially with Iran’s big brother Russia being the only thing that keeps Assad in power.

With the civil war/Jihadist power grab ravaging Syria, its neighbor to the north, Turkey, happens to be our NATO partner. Not only are American, British and Australian warplanes flying combat sorties over Syria, the Turks are now getting involved. Making a dangerous situation even worse, the Turks and the Syrians never did like each other. Taking it to the next level, the Russians don’t exactly have a loving history of mutual respect and admiration with the Turks.

Bringing the matches even closer to the bucket of gasoline, if any Syrian, Iranian or Russian forces should happen to purposefully strike against sovereign Turkish territory, the Ankara government could not only legitimately strike back, but every NATO member state would be treaty bound to militarily assist in any armed response. The same applies if any of the Moscow-Tehran-Damascus allied nations purposefully attack any American, British or Australian aircraft.

Subsequently, both the Russians, Iranians and Syrians would have no choice but to come to the defense of their mutual allies, regardless of whoever it was that initially attacked the Turks, Americans, British or Australians. Gavrilo Princip would have been proud.