You are here: Home / West Asia / The role women played in Indonesia’s first whole-family suicide bombings, and what to do next 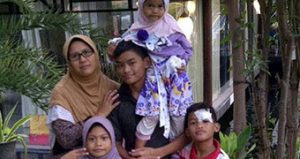 That parents could use their children to carry out suicide bombings, as happened in Indonesia earlier this month, is difficult to comprehend. In the archipelago, it’s an unprecedented terror tactic, like reported by abc.net.au.

It’s believed the family acting in Surabaya belonged to a cell of the Islamic State-inspired group Jemaah Ansharut Daulah.

Two possible reasons for the attacks are ISIS propaganda and an increased number of extremist women in Indonesia.

Whatever the causes, at least one expert says there is a clear need for new de-radicalisation methods in the country.

“It’s incomprehensible for us. Even for the Jemaah Islamiyah (JI) generation,” said Nava Nuraniyah, an analyst at the Institute for Policy Analysis of Conflict in Jakarta who consults on government deradicalisation programs.

“Since ISIS came about, their dream has been to migrate as whole families to the caliphate [Islamic state] land.”

But not everyone who wants to is able to migrate.

“For those who are stuck in Indonesia, they still had the same dream, and maybe [the families’ suicide bombing] was their way of going to a better place together as a whole family,” Ms Nuraniyah said.

Extremism on the rise among Indonesian women

The Surabaya terrorist attack could not have happened “without the willingness of the women themselves”, Ms Nuraniyah said, which highlights another of ISIS’s points of difference.

“They were a traditional hierarchical organisation and only men could pledge allegiance, because they thought the main role of women is to become mothers of future jihadists.

“To them, it’s just not strategic to get women involved in war, in combat, because that would decrease your chance of having more children.

“Whereas with ISIS, one big difference is that you’ve got a lot more women from Europe, America, even Australia, very active as propagandists on social media.”

That was the year Indonesia saw its first would-be female suicide bomber, Dian Yulia Novi, whose plans to blow herself up at the Presidential Palace in Jakarta were thwarted by Indonesian police.

The idea of redemption is another factor behind women’s radicalisation, and was a motivation for Dian’s bombing attempt.

“She believed her father had committed a sin…so that was her way of helping her father,” Ms Nuraniyah said.

Another suicide bomber, Ika Puspitasari, was seeking redemption for alcoholism, but had other reasons, too.

“She used to give [ISIS] money as part of her ‘financial jihad’, as they say.

“But because she lost her job…she offered herself, because she could no longer give money for the jihad.”

ISIS promotes the idea of a world’s end, coinciding with the coming of the Messiah, both said to take place in Syria.

Indonesians drawn to Syria, therefore, “intended to die there and not to come back”, said Ms Nuraniyah.

ISIS uses social media to spread this Armageddon message, as well as to promote the benefits of migrating to Syria.

Ummu Sabrina, who wrote a blog about her experience of migrating from Indonesia to Syria with her husband and children, described arriving in Syria to be met with a new apartment and free groceries, healthcare and education for her children.

Ms Nuraniyah said benefits such as these were an important attraction for women.

“That image of a state that will provide you welfare as well — it’s not just for the men to fight.”

How to de-radicalise a family?

Ms Nuraniyah said there is no one common reason for radicalisation, which makes an effective de-radicalisation program hard to achieve.

“Our de-radicalisation program usually refers to the program in prison for terrorist inmates, not preventative ones.”

In Indonesia, in-prison programs are successful and the rate of recidivism is low, she said.

“But obviously that’s not the only measurement.”

“In the past when the police tried to de-radicalise the men sometimes they tried to use the women, give them some kind of financial aid to survive so that they could pressure their husbands to cooperate,” she said.

“But you can’t do that if the whole family is getting radicalised now. We have no experience in that.”

She says mentoring, which has been a useful strategy with terrorist inmates, could be prove useful.

The mentor would preferably be a former-jihadi, but that’s not essential — what’s important is that it is someone experienced in how to handle radicalised people, Islamic or otherwise.

“You need dedicated social workers who are trained in this mentoring program.

Between 2013 and 2017, 500 Indonesians were deported from Turkey trying to cross the border into Syria.

Of that group, a huge number — 60 per cent — were women and children.

On returning to Indonesia, the primary concern of deportees is rebuilding their lives.

Before trying to migrate to Syria they often sell everything they own and return with nothing, Ms Nuraniyah said.

“First they need an ID card and then they need to get a job. They need a school that would accept their children without stigmatisation. So just all those basic needs first.”

Ms Nuraniyah says it is essential that deportees and their families are better tracked and that women deportees, particularly, are focused on more by government.

That group could be examined, she said, to explore why they wanted to leave as a whole family and also what they expected to do in Syria.

“It’s still at that experiment, trial and error phase I think for us now.”