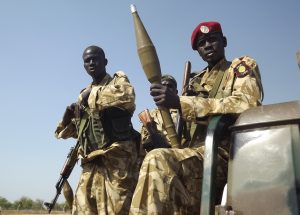 125 former Sudanese Prisoners of War (POWs) and detainees Sunday arrived in Khartoum after they were released by the SPLM-N.

In a statement released on Saturday, SPLM-N said it will release all the 132 POWs and detainees from government forces.

However, on Sunday it said that they decided to keep three in jail for reasons that they cannot disclose now also the others preferred not to return to Khartoum.

A senior official from the SPLM-N on Monday told Sudan Tribune on the condition of anonymity that some prisoners decided to stay in the rebel-held areas and join the Movement.

He pointed that the SPLM-N continues to hold 3 foreign fighters who were captured during clashes with the government troops, saying they “belong to Boko Haram”.

The same official added that the SPLM-N is interrogating those foreign fighters to find out why they entered Sudan and fought against the Movement.

Boko Haram, which refers to itself as “Jama‘atu Ahl as-Sunnah li-Da‘awati wal-Jihad” is a Nigeria-based group that seeks to overthrow the current Nigerian government and replace it with a regime based on Islamic law.

South Kordofan state and the neighbouring Blue Nile state have been the scene of violent conflict between the SPLM-N and Sudanese army since 2011.

Talks between the two sides for a cessation of hostilities and humanitarian access are stalled since last August.