You are here: Home / Analysis / The protests in Iran are a sign of an economy in trouble 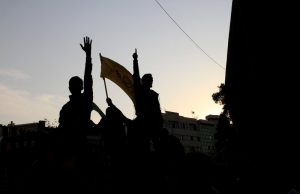 Iran’s President Hassan Rouhani may have to step back from some of his core economic policies in the face of nationwide protests by tens of thousands of people frustrated by high unemployment and stagnant living standards, like reported by fortune.com.

The protests, during which at least 10 people have been killed, are fuelled by disappointment that the lifting of sanctions on Iran in January 2016 has failed to deliver an economic boom.

Instead, the non-oil part of the economy has continued to struggle, with unemployment officially put at around 12.5 percent – in reality, much higher for Iran’s millions of young people – and inflation running at nearly 10 percent.

“There is a crisis of expectations in Iran,” said Tamer Badawi, a research fellow at the Istanbul-based Al-Sharq Forum. “It is a deep sense of economic frustration.”

To ease that discontent, Rouhani may need to spend more government money on creating jobs, restrain inflation by supporting the rial exchange rate and do more to eradicate the widespread corruption which angers the protesters.

But all of those actions would involve policy change. Rouhani has been pursuing a conservative budget policy to bring Iran’s volatile state finances under control, part of his effort to create an attractive environment for foreign investors. Meanwhile, fighting corruption would risk a backlash from powerful interests hurt by a crackdown.

Mehrdad Emadi, an Iranian economist who is head of energy risk analysis at the Betamatrix consultancy in London, said Rouhani faced a “Herculean challenge” fighting corruption in particular. But he suggested Rouhani might have no choice.

“People are more and more desperate,” he said. “In this situation, there will be periodic outbreaks of dissent.”

After taking power in 2013, Rouhani quickly reversed the spendthrift fiscal and monetary policies of his predecessor Mahmoud Ahmadinejad, curbing a system of cash handouts for lower- and middle-income Iranians.

Last month he proposed another conservative budget to parliament for the Iranian year starting next March 21. The $104 billion budget was up about 6 percent from the plan for the current year – a cut in real terms at current inflation rates.

Such austerity has become increasingly unpopular among the public as the economy has struggled despite the end of sanctions. Many foreign banks and companies remain reluctant to do business with Iran, partly because U.S. President Donald Trump’s hard line on Tehran has deterred trade and investment.

Emadi said a study to which he contributed found Iranians were dissatisfied with the economy for five main reasons: unemployment, weak purchasing power, corruption, a weak rial, and unequal distribution of wealth among Iran’s regions.

The study showed their perceptions of the first three areas have worsened this year, he said. In some areas of southeast Iran, unemployment among young people has reached 45 percent and the job market is shrinking, he added.

The rial has sunk to 42,900 against the U.S. dollar from 36,000 a year ago. Rouhani’s administration might support the currency by spending more of Iran’s foreign reserves, but this would risk deterring foreign investment; the International Monetary Fund warned against such a policy last month.

Emadi blamed much of the economy’s poor performance on a deep-rooted structural issue: the influence of paramilitary bodies such as the Islamic Revolutionary Guard Corps as well as religious institutions on business.

Those interests, which according to some estimates control over 60 percent of assets in Iran, generally do not pay taxes and stifle competition from small private companies, blocking job creation, he said.

Emadi said Rouhani’s administration was addressing this problem, pressing institutions to open their books to tax audits and demanding more transparency in the business world.

But Badawi predicted the government would find it hard to secure any quick improvement in the economy.

While it may announce a stimulus package to create jobs, it is unlikely to backtrack on cash handouts, and problems such as diversifying the economy and repairing a debt-burdened banking system can only be solved in the long term, he said.

“My guess is that nothing significant will change. The government will try to be open with people, to propose initiatives, but there are structural problems – diversification, the banking problem and relations with the rest of world, especially Trump.”