You are here: Home / Analysis / The “Pizza Jihad”: the Islamic terrorist pizza place next door 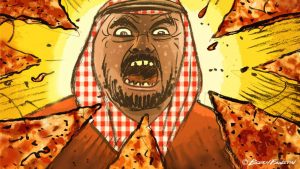 The New Jersey pizza place that may be the closest link to an ISIS leader doesn’t look like much. There are red café umbrellas out front and its menu offers the usual tangled multicultural fast food mess of Italian, Mexican, Chinese and Greek food. You can pick up the same Hawaiian pizza or baked ziti there or at the dozen other Albanian pizza places dotting this part of the Jersey Shore, like reported by frontpagemag.com.

“Are you incapable of stabbing a Kafir [non-Muslim] with a knife, throwing him off a building, or running him over with a car? Liberate yourself from hellfire by killing a kafir [non-Muslim],” Abu Hamza al-Amriki urged Muslims in the same ‘dude’ voice he might have once used to thank customers for their order.

There’s only a slight accent in the top ISIS commander’s voice as he curses America. The local resident has come a long way from slicing pizzas at the Jersey Shore to beheading captured Kurdish soldiers.

Margate City is a small town of six thousand. It’s famous for being the home of two things: Marven Gardens, an area that was once posh enough to make its way into Monopoly’s portfolio of Atlantic City properties, and Abu Hamza al-Amriki, who wants to kill Americans.

Abu Hamza al-Amriki’s real name is Zulfi Hoxha (pronounced ‘hoja’). Zulfi means sword handle. Many Albanian immigrants are secular, the Hoxha clan weren’t. The patriarch of the family, who worked in the pizza business, allegedly took the name Ramadan. His brother and sisters have European names. Like his son, Ramadan may have decided to take on a more Islamic name. He seemed to have drawn on the Koran for the names of his other sons and apparently named his daughter after one of Islam’s holy cities.

Those should have been warning signs. But our immigration system isn’t built to read them.

A Jihadist, a terror plot and a pizza place is a familiar story out here. An hour’s drive away is Fort Dix. That’s where Muslim Tatar ran Super Mario’s Pizza. The pizza place catered mostly to personnel from Fort Dix and McGuire Air Force Base. Meanwhile his son Serdar was plotting, along with the Albanian Duka brothers, to storm the base and open fire. The Duka family had illegally entered this country through Mexico. And the Duka boys had frequently been in trouble with the law even before Al Qaeda.

“We can do a lot of damage with seven people,” Dritan Duka had boasted.

The Dukas had their own pizza shop. “This place was a rat trap,” the Camden cop who bought it and renamed it Tony Soprano’s Pizza said. But, he recalled that “they would always have the Quran out.”

Like Zulfi Hoxha, Tatar and the Dukas followed that open Koran from the small businesses of a tristate area town to the embryonic caliphate of a multinational Islamic terrorist organization. Some immigrants move up in the pizza business by opening a second store. Others try to take over a country.

Mohamad Shnewer, a Jordanian Palestinian, had a father who ran Plaza Food Market and Halal Meats. Arsim Abdullahu was an Albanian Muslim refugee and former sniper who worked in a ShopRite bakery. Serdar Tatar worked as a delivery man at his father’s pizza place. That allegedly got him inside Fort Dix.

But the Pizza Jihad doesn’t end there.

“Al-Qaida said it loud and clear; we are fighting the American invasion and their hegemony over the earth and the people,” the Yemeni terrorist boasted.

Like the Duka brothers, Mufid Elfgeeh apparently had very low standards for running a pizza place.

The consistent thing about Islamic terrorists who live to kill is that they just aren’t very good cooks.

In Margate City, little more than an hour but less than a decade away from the Duka boys, another terrorist had moved on from his dad’s Jersey pizza place. Unlike the Duka boys and Elfgeeh, he had made it big. Instead of getting the usual perp walk, he was starring in ISIS videos.

Politicians in New York and New Jersey sing love songs to diversity. The ISIS video starring Al-Amriki, who had left behind calzones for the caliphate, was the ISIS version of multicultural diversity.

Abu Maliha Al-Kanadi and Abu Zakaria Al-Britani went on to blow themselves up. Al-Britani was really Jamal Udeen Al-Harith: a Gimto terrorist freed by the United States who was part of the Center for Constitutional Rights’ lawsuit against America. He died in a car bombing in Iraq. But not before receiving a million pound payout from the British government. Labour Home Secretary David Blunkett, who had campaigned for the terrorist’s release, wrote a Guardian article after the bombing insisting that “it was right to release Jamal al-Harith” because holding him in Gitmo was “morally indefensible”.

It’s unclear if the people that Britani raped and murdered agree with the leftist politician.

Al-Kanadi blew himself up in Mosul and took three Iraqi soldiers with him. But Al-Amriki appears to be alive. And as ISIS loses leaders to President Trump’s aggressive bombing campaign, he keeps rising.

Unlike Al-Britani and Al-Kanadi, he shows no interest in blowing himself up.

As ISIS leaves behind its failing caliphate to become a multinational terror group, the Al-Amrikis and Al-Britanis are its new face. When ISIS declared its caliphate, it dismissed the Al Qaeda model of covert cells terrorizing infidels in their own countries. Instead it urged them to move to Iraq and create the caliphate. But as President Trump destroys the strongholds of the Islamic State, it’s turning its attention to the one thing it does well… recruiting cab drivers and delivery boys to carry out terrorist attacks.

Al-Amriki avoided the failures of the very Jihadis he’s recruiting. Unlike the other pizza Jihadis, he didn’t try to carry out an attack in this country. The pals who helped fund his trip to ISIS, David Wright and Usaamah Rahim, were later caught plotting to behead Pamela Geller. But he got away clean.

How did the son of an Albanian pizza family from New Jersey who only arrived in the Islamic State in 2015 move up so quickly through the ranks? It’s obvious. Al-Amriki and ISIS were made for each other.

Islamic terrorist groups aren’t really built on a willingness to die, but on the ability to trick others into dying for them. Al-Amriki had that essential quality. Unlike the idiots who blew themselves up expecting 72 virgins to meet them for lunch, he got into the business of recruiting others to do the dying.

And the men he recruits may be the ones working behind the counter of the next pizza place you see.

Immigration and the internet, the movement of data and people, can bring an ISIS leader to a seaside town in New Jersey and then to Iraq. And it could just as easily bring him back to Margate City.

Next time you’re playing Monopoly and land on Marven Gardens, ISIS could already be there.

The real question is how badly do we want bad pizza and overcooked chicken? Do we really need any of the immigrant cheap labor that’s killing us?

Sayfullo Saipov, the Uzbeki Muslim terrorist who ran over 19 people in Manhattan in October, was an Uber driver. Akayed Ullah, the Bangladeshi suicide bomber, who set off his bomb in Times Square in December, was a livery cab driver. How badly do New York and New Jersey need bad drivers and bad pizza places? Are they more important than making it home safely to our loved ones?

That’s the immigration debate we need to have.

“Are you incapable of stabbing a Kafir [non-Muslim] with a knife, throwing him off a building, or running him over with a car?” Al-Amriki asks Muslims.

Does anyone really want to be there when the latest ISIS drivers and delivery boys answer the question?